The pantry smouse (one of the pantry smice, I suspect, as this one is a juvenile--no more than a hopper) trapped itself in the big stock pot on the bottom shelf. I found it because I heard it scurrying around in there and dug through stuff until I found it.) 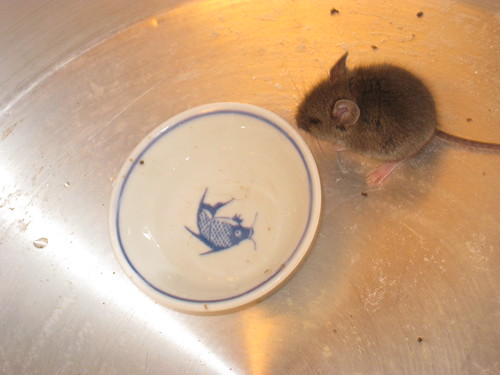 Yes, I gave it water. I'm not a barbarian.

Now I have to figure out where to release the little dude. Probably in the woods down by the grain silo. That seems like a better environment for smouses than my pantry.

The GRD totally ignored the scurrying AND the smouse. Still not a terrier, mom.

(Tossing it out in the yard, of course, merely leads to smouse reintroduction to the home.)

Because I am lame, and it was sounding more and more like a dreaded chore and less and less like fun, I have bagged on the skiing trip tomorrow. I was always more interested in cross-country than downhill anyway. Although I make a point of taking any opportunity for new experience that presents itself (within reason and sanity) there's no reason to force yourself to do something you're pretty sure you're not going to like just to prove that you don't like it.

...even though I do keep trying gin martinis and brie, in case I've changed my mind.

Instead, I will stay home and work on my book, like a sensible Bear. That honestly sounds like more fun anyway, and much less stress, attention, and public humiliation.

Took the dog for a run this morning. Two miles, with relative comfort. Along the way, I worked out a major plot point for "Ligature," which, even if it is not the work I am meant to be doing, is work, and feels good to have done and done well.

Soon as they call, I'm going to go pick up the Moby Smurfberry at the car vet, which means a nice stroll downtown--nice, that is, if it does get up to the forties today, as we were promised. If it stays 26 and windy, not so much, though the truly bitter days of winter are probably over for 2010.

Then the rest of the day is devoted to working on Grail in a sort of puttery desultory kind of way. Maybe I will finish Chapter 11, maybe I won't.

Maybe all this goalsetting is bad for me, and I need to just write what I am going to write and trust the novel to work itself out in my head.