Trust me, you don't want to marry a writer. Or any kind of creative artist, really.

This is not pretty.

It's the end of the book. Since Saturday, I've barely left the house. I had to look at a calendar to figure out what day it is. If I'm away from my keyboard, I'm bitchy and distracted, because the story is eating my head. I'm getting about two thousand words a day, which, okay, for

jaylake is a solid hour, hour and a half work, but for me is ten hours of butt in chair, punctuated by sanity breaks. I'm washing my underwear in the sink because I can't get the emotional energy together to do laundry (fortunately, I have enough shirts that I can stay clothed without resorting to wearing laundry, and nobody can tell if your black jeans are dirty anyway). If I hadn't had the foresight to make and freeze several pots of healthy veggie-packed soup in anticipation of this day, I'd be living off Purina Student Chow* and not noticing. After a while, my hands start to hurt, and even the pauses for research piss me off, because if I wasn't so stupid I didn't know this already, I could be getting more words now. I could be done by now if I didn't have to sleep, eat, or pee! I'll take the garbage out tomorrow, just shove it down a little! I'll wash the dishes tomorrow! I'll do the laundry next week! I'll sweep the floor when the book is done!

Yessir. When the end is in sight, I get a little bit crazy.

And then I will finish the book, and I will get to use this icon, and it will be accurate, because I will be exhausted and stupid for at least two days. I will eat when I remember to. I will sit on the sofa and drool. I will clean the apartment, because cleaning is mindless and the place will be too filthy to bear. I will go to the gym, and I will remember to play my guitar again, and I will go for walks, and I will call my mother and my friends and email my dad. I will buy groceries, instead of wondering what I can make with a can of condensed milk and three tangerines and then forgetting to eat while I get another five hundred words.

Balance and sanity will resume.

Until the next time.

I'm within fifty pages of the end, I think. I could conceivably finish this by Friday and be a sane person for the Thing on Saturday. If, you know, wearing drip-dry underwear.

Right. Coffee's ready. Break's over, Bear, back on your head.

Justine say, "Your Book No Belonga You. She's right as usual.


*Ramen Shame, to be precise 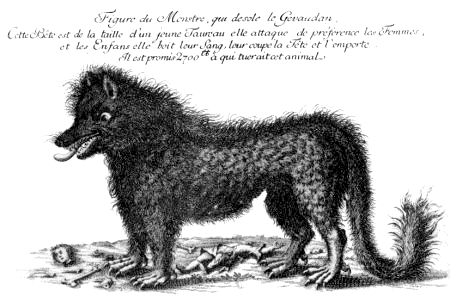 Really, how do you beat that caption?

"Picture of the monster that lays waste in Gevaudan. This beast is as big as a young bull and she attacks by preference women and children. She drinks the blood and bites off the heads and carries them away."

1,145 words so far today. And I have to pause, while I figure out exactly what the monster is* and how it got there and why it's being triggered by what's triggering it. I've done a whole bunch of reading up on maulers recently, though (for obvious reasons). They're a pretty common cryptozoological category, and as far as I know, the most recent series of reported attacks is one in Bulgaria 1993. We actually have a local example here in Connecticut--the Glastonbury Glawackus, which was spotted several times in the thirties, although I don't believe that one's credited with any deaths. [prevailing theory is that it was a displaced wolverine or fisher cat.])

Actually, a wolverine, except for size, fits the description of la bête du Gévaudan exceptionally well, right down to the pale stripe on its chest. Of course, wrong continent, and even allowing for exaggerration, as happens when people are excited, there's a world of difference between thirty-five pounds and the size of a yearling bull. Also, wolverines, mythology aside, tend to be exceedingly retiring beasts.

Maybe it was a translocated wolverine with a pituitary condition.

*hint: it's not actually la bête anthropophage du Gévaudan, though our heroes could be forgiven for thinking so.)


On a totally different topic, as long as I'm having a think break, all this talk of predators and a conversation in chat about polar bears (polar bears give me a wiggins. I've been six inches from an adult male lion (this adult male lion. there was glass! he was leaning on the glass!) and I've held a falcon on my glove and looked it in the eye, and I did not have the ice-cold skin-crawling reaction I do to being within eyeshot of a polar bear, even when the bear in question is safely on the other side of a twenty-foot trench and a glass wall. )

Polar bears have those eyes. And that snaky head. And they look at you with so much interest, as if they are considering their plan of attack.

The only thing I've experienced that came close was being scared half out of my wits by a mount of Therizinosaurus on the first of two occasions when I saw the traveling feathered dinosaur exhibit. (I saw it in San Diego and at the ROM.)

You see, in San Diego, they had it set up so you rounded the corner, came around the velociraptors, and paused to read a sign--and then looked up at the display. And some clever Joe had arranged the display so that when you looked up, you were exactly at Therizinosaurus' point of focus. Therizinosaurus is thirteen feet tall and has a long snaky neck and three foot claws. Three. Foot. Claws.

Look at your arm.

If you ever want to know what a prey freeze reaction feels like from the point of view of a shrew? This is the way to learn it.***

Anyway, that scene in Carnival where [spoiler] is confronted by the [spoiler]? Yeah. That was me and Therizinosaurus.

***Therizinosaurus, entertainingly enough, was probably an herbivore. But man, that model looks hungry.

It is not romantic to compare the blue veins in your girlfriend's milk-white wrists to Roquefort.

I realize you've been dead for a long time, but some things remain constant.

Abby Irene just figured out the thaumaturgic connection I didn't manage to figure out on my own.

This is a ghost story.

You have corrupted me. Your vengeance is complete.

matociquala: I am wondering if muted emotion isn't a good thing for a vampire story. To cut down on the wangst.
[18:06]

stillsostrange: there's a wangst shortage.  My angels are hogging it.
[18:06]

matociquala: And I need to stop listening to Tom McCrae's "Vampire Heart" and Neko's "Dirty Knife" back to back, or I will get a story.
[18:07]

Cory's on my teevee!
Collapse