There. I have a draft of the harpy story. I wrote 3,730 words on it today, and it's basically all I did today, other than wash a sink full of dishes and go to the gym this morning. Oh, and send out a few emails to potential landlords.

Needless to say, I feel pretty wrung out.

I suspect it's a badly broken draft, as it feels all clunky and awkward and like it's probably missing the thematic edge I want it to have, but I can fix it later. It's a draft, and it's done, and I don't have to look at it again for a while.

You know, it's amazing how productive I can be when I can fold up the little voice that tells me that the story has to be absolutely perfect, and my work isn't worthy of the ideal story that's somewhere in there under my blunderings, struggling to get out.

Okay. Current plan, then, is to try to finish "Smile" and the blind cave mermaid story, and then revise Chill, TStM, and OEJ&TSK. And then I'm pretty much out of the woods for a good long while, which maybe means I can get some of the less pressing career clutter seen to.

Write "Smile" (Bone Garden) (started)
Write "The Horrid Glory of its Wings"
Write "On Safari in R'lyeh and Carcosa with Gun and Camera."
Write the blind cave mermaid story. (started)

Sell some books before I starve

Oh, and for the record, unlike all the other writers blogging about it today, my characters totally are virtual people who live in my mirror neurons.

Yeah, so. The harpy story is definitely broken, because

truepenny read it and identified exactly the same brokenness that I suspected.

The good news is, I think I know how to fix it. It may require some major surgery and an organ transplant, but I know what to do.

I hate broken stories. They hurt. Until I can figure out how to fix them--sometimes until I get the work done--they make a physical sensation of pressure in my chest, like being unable to draw a breath. I get very anxious and crabby, and I want to whine and pace like a nervous dog until they stop being broken. And when a broken one makes it into print (as does occasionally happen, due to deadline pressure or my never figuring out how to fix something that's been written to contract) I have to live with the knowledge that it will be out there, broken, forever.

I finished a (broken) story yesterday. So today is a Day Off. In fact, I may declare it an entire Weekend, since it looks like getting snowed in overnight.

So, no gym today. I might be going out to visit with friends later for a bit until snow flies. Tomorrow, I'm definitely doing laundry and sweeping and roboting the floor.

In the meantime, I shall be reading Lamentation. Which I have in ARC. *Cuddles.*

A snowpocalypse is underway, though we appear to be at the intermission. The sky is still glowing white beyond the houses across the street, though, so I'm pretty sure we aren't done yet--and the radar confirms my suspicions. The next wave is supposed to be sleet, too, and persist through lunchtime tomorrow. Yum.

Looks like I will not be making it to either my D&D game or my qigong class tomorrow. Ah well, sleeping late is something we don't get to do often enough around here.

Sadly, the internet is boring tonight (aren't you all supposed to be entertaining me while I'm snowed in?) but I do have a good supply of coffee, tea, cocoa, catfood, and unread books, so I imagine things will be okay in the long run. That'll be two days in a row without hitting the gym: can the furniture survive?!

Apartment hunting has commenced in earnest, though I don't expect to find a place before early February, as of course everybody renting now wants tenants for the first of next month, not the first of March.

And the harpy story is still broken. And I'm still not fixing it today. I am starting to have fairly serious writing itch, though, which is good. It means the post-novel ennui is wearing off, and maybe when

coffeeem sends back "Lucky Day," I'll have something useful to say about it.

In the mean time, though, eventually I will have o fix the harpies so they will leave me alone. And maybe if I get that done, the blind cave mermaids will tell me about themselves.

From the department of some things were meant to be utilitarian department:

From the department of products designed by somebody who has never actually changed a baby boy department:

(Otherwise known as a good way to study ballistics.)

The Snowpocalypse glows in the dark. 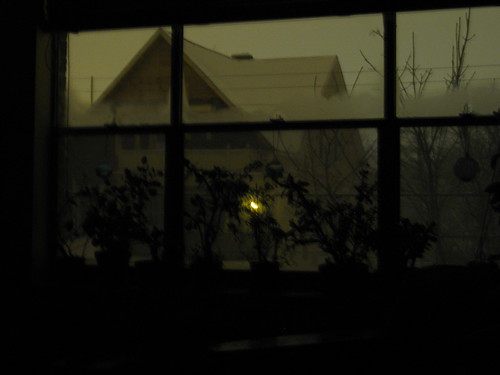 It's very bright out there, as it usually is during a snowstorm at night anywhere where there's ambient lighting.

The Snowpocalypse has a high albedo.

Here's the rest. Really, it's more pinkish than green out there. And some of the photos are blurry, because I was handholding extremely long exposures. Sorry about that.

I wish I could have gotten a shot of the icicles on the streetlight down the block, but of course the light washes itself out.
Collapse