Okay. The bulk of Vericon survived, self clothed (in layers because last night winter came back). Now to pack up the hotel room, check out, find someplace to stash the car until the con officially ends, and get myself down to The Good pain for some coffee and calories.

By the way, I know I have mentioned this before, and here I am mentioning it again.

The two workshops I am teaching at this year are:

Applications for both are open, and should be streaming! in!

It occurred to me this morning that in all probably, the vast majority of people reading this have never been to Boston, or Cambridge (Massachusetts, USA) for that matter.

Harvard Square isn't. It's a square in the London sense, which is to say a randomly-shaped starfish of a metastasized intersection that occurs where a number of secondary streets get caught in the gravity well of Massachusetts Avenue. There's a green, some statuary, a news stand, three exits from the Harvard Square Red Line T Station, and a bunch of gates into Harvard Yard, where you cannot park your car.

The architecture is chiefly brick--white and red--with the occasional more modern building. It's somehow both changed a lot and not at all since I set a story there. Today, I would probably mention Finale, Plan B., and Alpha Omega. (And Grendel's Den doesn't actually have neon, but we make sacrifices for art.)

I don't know Boston or Cambridge particularly well. I've visited a lot over the years, but I've never lived there, and I think it takes me about two years to get a sense of the soul of a place.

Businesses include the Harvard Bookstore (actually a bit up Mass Ave), a Lush and a Body Shoppe, Urban Outfitters, and Cardullo's Gourmet Shoppe (home of all tea and all chocolate). And pretty much one of everything else, or maybe four. Ten or eleven, in the case of caffeine delivery options.

You can navigate the entire area by dashing from tea stop to coffee emporium, and--as usual when I go to a city where I don't live--I spent a good part of the time I was there eating my way across it. This year, Finale (which sadly I think is sort of overrated), Tealuxe, Felipe's Taqueria (carnitas burrito win, OMG), Charlie's Kitchen for burgers and Hoegaarden, and brunch this afternoon at Veggie Planet. Not to mention the pilgrimages to the sacred Au Bon Pain. (If you don't have a With Good Pain in your town, imagine something sort of like a Starbucks with all the suck and much of the pretentiousness removed. They have real food, you can order a large latte without beeing sneered at, and the pain au chocolat is not the best I have had, but it is in the top three. Not too shabby for a chain.)

Hey, all that tromping around in the cold burns calories! 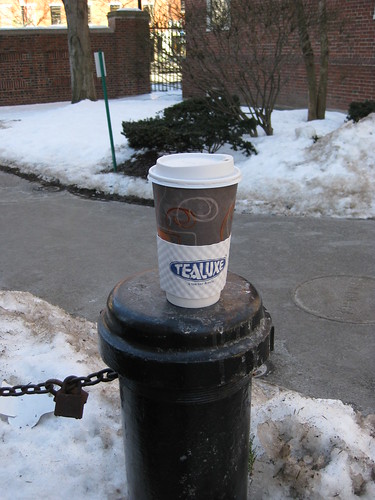 (my balm and solace)

Anyway, the Harvard Square ABP has a glassed-in greenhouse where you can sit and drink your warming beverage while looking out at the university--and in the way of things, that greenhouse is inhabited by a couple of smart, fat sparrows who are much snugger (and smugger) than the sparrows still stuck outside. Also, it may be January, but the Harvard Square squirrels are not exactly on hardship rations. I dubbed this one the Little Matchsquirrel for his tendency to sit up outside the glass staring inside. However, my attempts to get a photograph of the xtreme cuteness came to naught.

The area boasts a couple of flatiron buildings, a feature of the Northeast and its crookedy streets which always soothe my soul. (Detail of a window sign from that second one. Very famous law firm, don't you know?) Other local landmarks include the Cambridge Savings Bank sign.

And, as you may have noticed, a metric buttload of snow.

Just found the page in my notebook in which I wrote down things overheard while eavesdropping on the street today:

"It would look bad in front of a jury, I guess."

I love my job.

How strange. On a page dated December 8, this notebook appears to have most of the bones of the blind cave mermaid story in it. It's in my handwriting, and I don't recall writing any of it.

Oh, now I do. I wrote it at the Iron Horse, I think, during the Vienna Teng concert. And then forgot all about it.

Some of it is rather good.

Good thing I had the sense to scribble it down.

See, the problem with this writer gig is that nearly every book I read these days is written by somebody I know and like, and it makes me want to like the books as well.

What a weird, brilliant little book this is. I think the end is a bit rushed and muddled, and I think Doc could have protagged a bit more (he does an awful lot of go-and-dying, and I would like him to have more agency), but it makes up for it in sheer WTF and gorgeousness.

Book #6, Patrick Rothfuss, The Name of the Wind

I feel like I should get credit for two books for this one. It's a doorstop. I was also, alas, somewhat disappointed by it, because it starts off rather promisingly with beautiful writing, snarky demon sidekicks, and silicon spiders as big as cartwheels, for which I was willing to forgive the redhaired wizard bard assassin protagonist. (At least this one was male.)

But then the silicon spiders turned into a frame story for 600 pages of backstory and bildungsroman, and by the time I got to the end of it, I realized that I really didn't like the arrogant son of a bitch very much, and I didn't actually care about his travails as the most brilliant student ever because I wanted to hear about the snarky demon and the silicon demon spiders.

On the other paw, Pat can really rub words together, and I am glad this thing is selling like hotcakes, because I like Pat and you should send his beard your money. The average epic fantasy reader is probably more tolerant of 600 page flashbacks than I.

...too many novels. Send nonfiction.

(Actually, I have a book of Marlowe criticism lined up next. Win!)
Collapse