pecunium is looking for sponsors to help him win a contest sponsored by Microsoft and Lenovo which could be important to his art.

You can see a selection of his photography here.

My review of Criminal Minds 04x17 is up at Tor.com.

And Chaz really needs to stop yammering in my ear and let Doc talk for a bit. Because Doc's the one who's supposed to be in this book, not the Platypus. And this is the book that needs to get written.

So I just got distracted for half an hour by a linguistic question raised by a Tom Waits song. Which is to say, What exactly does "walking Spanish" mean, anyway?

Well, thank dog for the future, because in the space of a few Googles, I have determined that it's an idiom dating from the 1800s or earlier, which means (literally) to be frog-marched. In other words, one who is "walking Spanish" is the recipient of a frog-marching, and it describes the tiptoe progress of someone who is being hoisted up by the seat of his pants and propelled forward by pressure of a hand against the nape of his neck.

By extension, it also metaphorically described the progress of someone unwillingly ejected, or forced to carry out a task he does not prefer.

(And shall we even talk about the historical nationalistic hatreds revealed as linguistic artifacts by both "walking Spanish" and "frog-marching"?)

Oh, dear. I appear to have caught the tone of this New York Times article from 1877, describing the idiom and the practice, in the context of the forcible ejection from the halls of government of one Dr. Mary Edwards Walker, Congressional Medal of Honor recipient, for the offense of... wearing trousers.

Well, I guess it can only help me write Doc. And you can bet he's going to be using that idiom some point in the course of it.

*walks Spanish back to the book*

Including an amazing witch house.

I know I've mentioned repeatedly that the Complaint Department builds crop circles and henges out of glitterballs in the night, all around my bed. And she sings and chants to the balls as she's doing so.

I imagine it's either monkey mind control, or she's signalling the mothership.

It finally occurred to me to document this phenomenon. So here's what I woke up to on Tuesday: 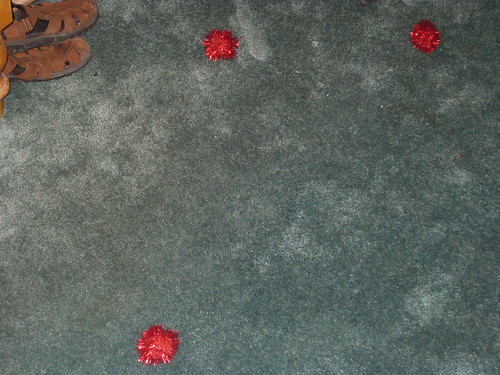 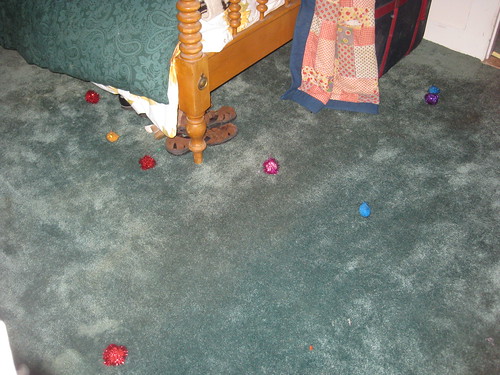 As you can clearly see, the signals are obviously based on a trinary system, and they're growing more complex. I'm pretty sure the blue and purple balls in the second photo are meant to indicate the moon/Earth binary system.

Should I be worried yet?

In other news, a box of Seven for a Secret showed up on my doorstep today, and so did a royalty check for Wastelands, edited by

johnjosephadams. This is my first ever royalty check for an anthology, and it makes me feel like a Big Kid for realz.
Collapse