The dog is still sleeping, so I took advantage of the first hour of my morning to answer an email from the delightful translator of Carnival into French (it's been a week for talking to translators) which I hope has solved her questions about my legion of linguistic idiosyncrasies.

In other news, the edit letter for The Sea thy Mistress has landed, and (as I suspected) it's going to be a lot of work to fix. I tried to do something arty, and apparently it's not working. Still, at least the plot and structure are okay, which are always the hard things for me to fix. (Books, in my head, have very definite shapes, and those I really can'tchange. I can alter all kinds of other things about them, but not the shape.)

casacorona wants me to add massive amounts of exposition and linearity. And those foolish transitions.

And visual information, pshaw. Who cares what things look like? Nobody notices that stuff! (Okay, so I'm the least visual person around. I guess it matters to other people. I'll make some things up. *g*)

I don't know why you people can't just accept the narrative beamed from my brain...

But the shape of the book is okay, so it's doable. Just mountains of work.

It's a good thing I never figure out my hourly wage. (Well, there's always sepukku, I guess, which would be easier--especially since as a woman I get to do the girly knee-pushups throat-slitting version--but that seems like an over-reaction, and besides, who would feed the cat?)

In any case, the fun here is that it would be nice to get paid for this book sometime before I and the critters starve in the gutter, since (given the nightmare that writing Chill was) I expect a second probably equally extensive edit letter on the other book I turned in recently. (I also base this on what a dog's breakfast the drafts of both the mermaid story and the harpy story are, right now.)

Apparently, I have lost any slight ability to construct a coherent narrative that I ever had.

You would hope that writing, as a learned skill, would stick with you, but it never does.

So, If I want to eat and stay housed, I have to get through the CEM of By the Mountain Bound, and I have to finish this revision post-haste. (Also, for psychological reasons, I need both Chill and this book out of my life.)

It's starting to look more and more like now would be a good time to go pick up some temp work, especially since the entire publishing industry is paying even more slowly than it normally does, which is glacial on the best of days.

The Giant Ridiculous Dog and the Complaint Department are in the same room at the same time and nobody is behaving badly. Admittedly, the GRD is on a leash and the CD is atop a very tall bookshelf, but it's still progress.

Page 45 of the CEM. Alas, the CE has turned all gothy wolf-boy's telepathic dialogue into boldface, to match the pony's. STET, I say thee. STET!

I will get as much of this done before dinnertime as possible, then order pizza or chinese or something and work on the revision of "The Horrid Glory of Its Wings."

Tomorrow, I must slush and write an edit letter. I am probably going to cheat and do these things during downtime of my AD&D game. Yes, the secrets will out...

129 pages of CEM accomplished. Breaking for dinner before the revision party starts. 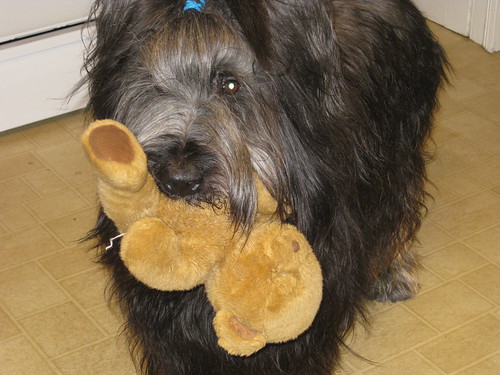 Officially, the cutest dog ever.
Collapse