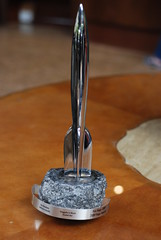 Back from the Worldcon, and as you may have heard by now, I seem to have won a Hugo. (and lost another one--or a tenth of one--for Metatropolis.)

ETA: Via Neil Gaiman, here's a better photo of me (and him and Frank Wu, who nearly deafened me with his whoops of delight). This one shows my punk rock boots to full advantage. Though sadly, Neil is not licking his hugo. (Ellen Klages later licked mine. Perhaps this is a tradition of which I was unaware?)

I'm delighted beyond words by the whole thing. It's beautiful--the base, designed by Dave Howell, is the most gorgeous I have seen (under that rocket on the granite asteroid is a blast pit filled with irridescent maple leaves)--and of course, I mean, it's a freaking Hugo.

I am going to love it and hug it and put it someplace where it will catch the light. This thing is an art object.

No problems getting it through Customs, by the way--we lucked out, and got Fen for a border agent. He just wanted to see one up close.

Other than that, the con was generally wildly pleasant--there was good food, good fun, and an unrelenting schedule. Also absinthe and dancing and meeting some really wonderful new people, as well as catching up with the old. I do regret I didn't get to spend more time with my graduated VP students. I hoped to catch up with them Sunday night post-Hugo, but er. I reckoned without the winning thing. 0.o

(Thank everyone for the congrats. I'm overwhelmed.)

The fun was had despite cascading organizational disasters. We were staying in the Delta Centre-Ville, notable for a dearth of internet access, decent food, available potable water, or reliable access to the rooms the con had paid for the use of. Also, the elevator lines were epic. Epic. Actually, there was no drinking water to be had for love or money about fifty percent of the time anywhere in the con (the green room was a disaster) and yet, despite this, I get the idea everybody had a pretty darned good time.

I was on several panels, all of which amused me, though the clear winner was the sF music one.

It was interesting to attend such a small Worldcon (under four thousand registrees) spread out over so many city blocks. The con never felt crowded, but I saw almost everybody I know--a notable exception was Jim Macdonald, thought I did get to hug the Doyle and their daughter Pip.

Oh, and while I was out, there was Shadow Unit.

The dog and cat are happy to see me, and now I am going to sleep.

Tomorrow, I start writing Grail, because Amanda helped me figure out where it starts in the car on the way home.

Well, Worldcon is over (or will be when I deliver the badger to her plane after lunch) and suddenly my desk is full of things that need doing. To wit, before the end of the year, I need to draft a Jacob's Ladder novel and a New Amsterdam novella, make significant progress on another novel, A Reckoning of Men (in collaboration), get an episode or two of Shadow Unit in the can for S3, write a vignette for a tribute thingy, write an introduction for a story in another tribute thingy, do some thinking work on a secrit projekt collaboration thing, think about a space opera and a vampire story, start writing Smile, and maybe make some progress on The Steles of the Sky.

But right now, what I need to do is nag touch base with editors and get the page proofs for Bone & Jewel Creatures and the mmpb edition of Hell & Earth done. And start writing Grail.

I'm excited to be back at it.

And that's a pretty good shot of the stripy in my hair.

And now, page proofs, and then I need to start Grail and also the New Amsterdam thingy before bedtime.

Either the dog is shedding, or tiny mammoths are migrating through my living room.

Alas. I am a victim of the tomato blight. I just pulled out five previously healthy tomato plants, salvaged the uninfected fruits, and consigned the rest to the landfill. 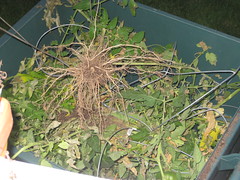 So sad. I will, however, be making a green tomato pie or two with the salvage: 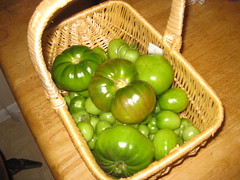 one of which is rather an art object: 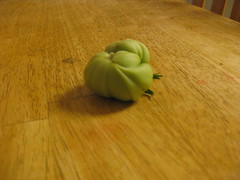 I'd probably be much more disappointed if I didn't have a rocket ship. 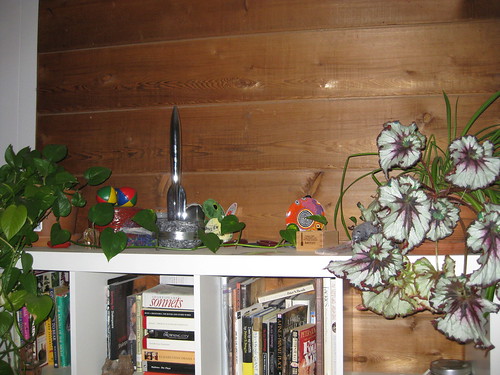 While in Montreal, I met Aliette de Bodard, one of the Campbell nominees. She has a powerful, unsettling story up at Fantasy this week.