After yesterday's Pet Expo Extravaganza, I came home and cooked dinner for my mom,

thecoughlin, and The Jeff. And then I fell over with a splat.

It's amazing how exhausting a couple of hours standing on a concrete floor saying "It's a Briard, a chien de berger de Brie, which is to say a French sheepdog first brought to North America by Thomas Jefferson, because they so impressed him with their herding ability when he was ambassador to France. In Europe, they're still used for their traditional purpose, and also as police dogs and home companions. The breed almost died out during the World Wars, when they were used as sentries and also by medics to help identify and recover wounded soldiers. There are images of dogs strongly resembling the Briard on tapestries dating back to the time of Charlemagne. This particular dog is a seven-year-old male; the black bitch over there is his daughter and the red one is his half-sister. The pale tawny one is the black one's half-sister on the mother's side. Yes, you may pet him; the breed standard calls for the dog to be reserved with strangers but confident, and he's quite friendly." can be.

Today, I plan to take the dog for a walk along the Laurel Marsh Trail to enjoy the foliage, work on the devil ponies, and not talk to another living human until TBRE comes home.

The bread is out of the oven, so I can take the dog to the park, but I wanted to show you the drain centipede I rescued from the sink this morning. (We also get them in the bathtub and dishwasher--the one I found in the dishwasher some time ago actually made me jump back and say EEK! unironically).

However, because some people do not like creepy crawlies, I have put his mugshots behind a cut.

I think it's quite pretty.

The GRD and I just got back from a great big walk--about five miles along the Laurel Marsh Trail, which is tucked into a bit of swampland in the corner between I-84, I-384, and West Middle Turnpike in Manchester. We saw all sorts of things, although only four other monkeys--a hiker, a jogger, and a father with a little girl. We also met two garter snakes (both of which we nearly stepped on), a suspicious turtle, three hawks, a great blue heron, and a !!!squirrel!!!--but did not get photos of those last.

It was a beautiful day for a walk. The maples are nearly over--only a few are still holding on to their leaves after yesterday's rain--but the oak trees are incredible this year. Often they just go sort of a dingy brown, but this year we have reds, oranges*, russets, and olives. Not as bright as the maples, but very rich, lovely tones nonetheless.

Sadly, we also got to get up close and personal with some of Connecticut's exciting invasive species, including oriental bittersweet and phragmitis. I also found this interesting plant, which I do not know the name of. 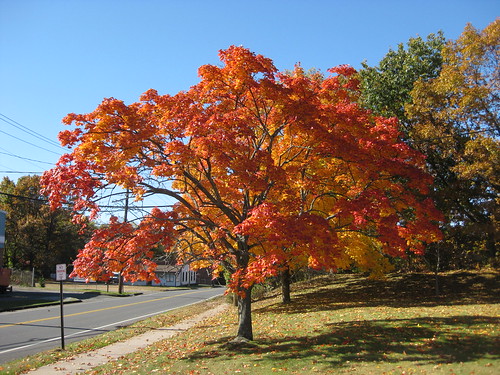 *Yes, the sky really is that color. Don't you wish you lived here?

2871 words on "The Romance" today, which wound up over 9000 words long, and I still have to write a scene that explains a bunch of stuff that I dunno how to explain. But it's goo enough for a draft, and I am calling it one.

It feels kind of empty currently, as if it doesn't know what it's about. But hopefully it will eventually tell me and I can put that in a second draft.

Anyway, for now, it's done. I think I am putting my slush off until tomorrow.

Also, we appear to have a smouse.

And the sunset tonight was awflly pretty: 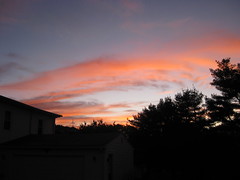