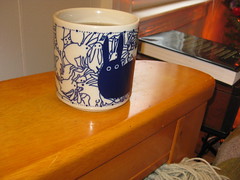 Ahh, tea. Today's tea is gunpowder green mixed with peppermint, as a cure for shoveling. Today's teacup is Paraphilias Involving Bunnies, which I have had since just before college.

Today's morning temperature is 32 degrees on the dot.

And now I am on the job, having been up since seven doing needful snow-related things (and making tea).

It was pretty out there--white snow, black dog, grey morning. (Wasn't that a Joy Chant book back in the day? I should really reread The Grey Mane of Morning one of these years.)

Here, have a holiday card image: 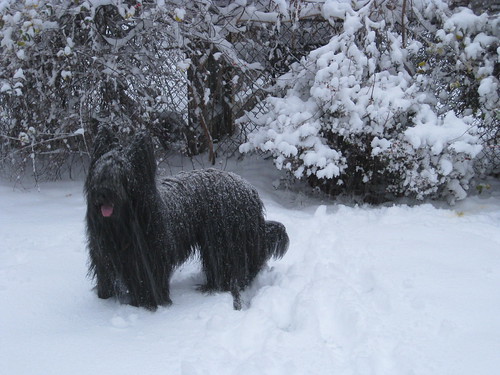 And here's one I took for

buymeaclue, in which we can see how inconvenient a long coat can be in heavy snow: 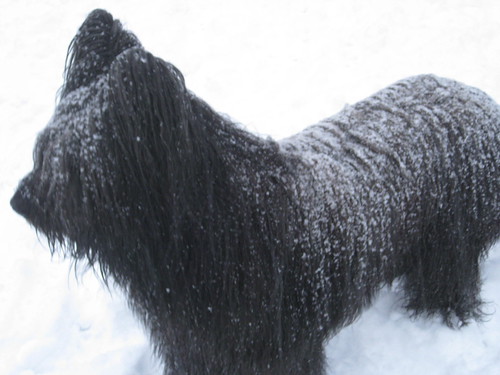 Time to go climb as soon as I eat something here.

So I had carrot cake and milk for dinner (what? It's veggies!) and I am having bourbon and tea for dessert. Being a grownup has its advantages.

I did indeed attempt that (unrated, but ptobably a 5.8) route on the skywall tonight--twice; the second time I got two holds higher than the first. But I failed to unclip the pro without pumping out and losing my grip, and once you're off this sucker you ain't getting back on. I think I can do it, though--I made it up the overhung part and started the transition to the vertical, and this particular route goes up the corner rather than across the roof, which is much, MUCH more doable.

As warmup for that, I did the easist 5.6 I could find (really did not want to get pumped) and then I went out back and did a moderately overhung 5.8, though not the one on the big wall (which I really need tocome back to). I finished the night on the slab, because I fell twice on the crux on that second 5.8 (turned out the trick was to stop messing around with the feet and just go big on the left foot left hand, because the right foot I was trying to step up on was useless except to balance against) and the second time I fell I almost stuck it... which is, of course, how you hurt yourself.

Anyway, I tried a pink route that Jeff suggested (It's not rated yet, and I had been avoiding it because it looked sketchy and out of my price range) and I sent it. Not without falls, and I did not do the headwall with elegance, but I sent it. Then I dropped down the headwall and kept working on that move on the yellow route on the same rope that still defeats me... and was defeated by it.

Here are some photos of the skywall, by the way, so you can see what a beast it is. This is the front room's old paint job: it's much prettier now, having been done in red rock murals some time back. That horrible thing you can see off right in the second photo (the one taken from an elevation--which is to say, the stairs up to the bouldering cave) is the barrel vault, famed in song and bitching. The part you can see in this photo, where it bulges out there, is on top of ten feet of steep overhang.

The red route I have been talking about, the balancy one that's all splits and stemming, is in that back right corner there.
,
The route I am working on goes up the vertical wall on the right of the Sky Wall, crosses the overhang at the top (there where it's in shadow), goes up that corner alongside the roof, and then straight up the vertical.

I may be figuring out this climbing thing. I am pretty pleased with me tonight. Kjitten just knocked over the lamp on my dresser. And then dematerialized, as kjittens can.

This is his second lamp this week.

mandolinjen, what's that thing you say? "For pretty, not for smart?"

I would just like to say that, looking ahead, I am totally geeked that they are doing an episode entitled "The Uncanny Valley" and i really wish I knew who was writing/directing. And I am also geeked that Jim Clemente is doing another ep for them. Win.
Collapse