Dear Congresscritter Larson & Sen. Dodd (any you, too, Joe, you useless sack of paranoid hypocrisy);

Earlier this week while attempting to return to his native soil, Canadian citizen Dr. Peter Watts was pepper sprayed, beaten, detained, and dumped in his shirtsleeves in the sub-freezing cold of a Michigan snowstorm by Port Huron crossing border guards. These guards, in what I believe to be an attempt to cover up their malfeasance, have charged him with assaulting a federal officer. A police report that directly contradicts Dr. Watts' account of events (and the reasonable timeline of events--why would a Canadian who had already been in America for some time be entering the US?) has been filed. Apparently there are video tapes, but they--and the police report--have been withheld from the press.

Dr. Watts is a colleague and a personal friend of mine. He is a marine biologist and a distinguished and critically acclaimed author. I know him to be a gentle and civilized human being, an intellectual, and someone I would without hesitation trust with a key to my home. He is and has for many years been engaged in feral cat rescue; I have seen him stop on the street to give a homeless man money--and an argument, because with Peter, everything comes with an argument. While he is a gentle man, he is not meek.

The sin that "provoked" this gross abuse of power was apparently Dr. Watt's continued questioning of why American border guards were searching the car of a Canadian citizen returing to Canada. As you are no doubt aware, this is not standard procedure.

I believe he questioned the authority of the border patrol, and that is why he was beaten, thrown drenched and under-dressed into a cold holding cell, and eventually dumped at the border.

But do we wish to become a society that enforces meekness in the face of abuses of authority on pain of physical abuse? There are other societies that have enforced the rule of law through terror. I do you the dignity of assuming that you do not need reminding of their names and infamy.

Or do we wish to be able to say proudly that our society is one of free citizens consenting to be governed, and is strong enough to stand up to a few hard questions? The Quakers, a venerable and peaceable American institution, have a saying: "Speak truth to power." Benjamin Franklin--a venerable and perhaps somewhat less peaceable American institution--famously said, "Those who would give up Essential Liberty to purchase a little Temporary Safety, deserve neither Liberty nor Safety."

This time, Dr. Watt's abusers made a mistake--this time, they chose to batter an internationally known and respected author with friends and fans on six continents. But how many other individuals have suffered this kind of savagery?

My friends who are foreign nationals are afraid to come to the United States. They are afraid of the consequences. I have heard so many tales in the past few days of harrassment, cruelty, and outright abuse from American customs agents--both against foreign nationals traveling on legitimate business and American citizens returning home--that I wish I sould say I was appalled. But the fact of the matter is, it came as no surprise to me.

I have had some delightful experiences with American border guards. I suspect most of them are professionals in a hard and scary job, charged with a great responsibility and inadequate resources, doing the very best they c an. But I have also met a few who I easily believe would haul a middle-aged former college professor out of his car in the middle of the night and brutalize him.

Terrorism is, by definition, the evil art of waging war by inflicting terror. By cowing the enemy. Are we terrorists? Are the innocent citizens of our friendly and allied neighbor enemies to be cowed?

The charges against Dr. Watts must be dropped.

The US Customs Agents guarding our borders must receive adequate training and support, and those who abuse their authority must be weeded out.

This is wrong and it must stop.

ETA I'm Creative Commonsing the text of this letter. Feel free to swipe, revise, remix, and use any bits you like as a model for your own communications with your elected representatives.

This work is licensed under a Creative Commons Attribution-Noncommercial-Share Alike 3.0 United States License. 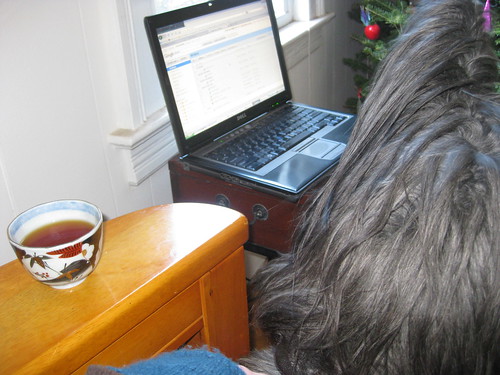 Commencing work this morning with a dog who says the floor is much, much, much too cold, and can't you please turn on the summer, monkey?

Tea today is a nice Assam from Upton (Mokalbari East); teacup today is an autumnul Chinese cup with leaves and berries and cherry blossoms.

Apparently, les smice have been eating my pie overnight: 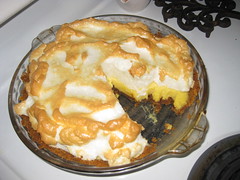 I did not know that les smice used forks, however.

Not actually sure what work is getting done today--I think I'm going to go poke at Grail and see what happens. Having a third of it drafted is very reassuring: the end seems so much more attainable from here than from zero: I mean, 250 pages is little enough room that I start worrying about running out of space rather than how on earth am I going to fill this with interesting narrative?

And in conclusion, a dog loves you. 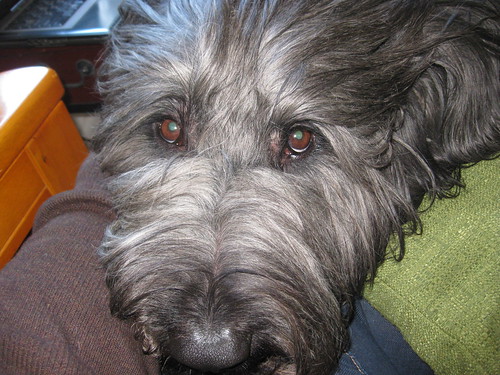 Well, there you go. Carbon footprint justified for another day, sort of, as much as it ever is.

Man, it's a good thing the inside of my head is posted private property. Some days, I have more in common with the Grey Wolf than evolution would prefer.

Or, as Lyda Morehouse once said of me, "This woman is not on our side."


I think tomorrow might be a Day Off. I kind of need one.
Collapse