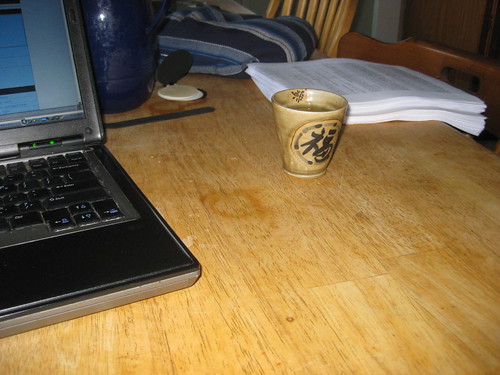 The printer router the beloved

netcurmudgeon set up for me appears to have died the death (I wonder, somehow, if cats are responsible) so I had to crawl around under the desk and hook the printer up directly to the desktop, and then port files, and then--

And all this while not feeling so hot, and in the throes of PMI (Premenstrual incompetence. Hormones give me brain fog.). And then the dog decided that it wasn't too cold to go chase the ball for a VERY LONG TIME before doing his business, which meant somebody had to throw that ball. Somebody inadequately dressed, with cold hands, because see above brain fog.

So that was my morning.

Is it too early to start drinking?

I'm in the midst of a caffeine detox, just in case the weird fits of anxiety I've been having are triggered by the buzz. (I suspect it's more deadlines and incoming! baby and deadlines and slow-paying publishing industry and deadlines and coming to terms with my spinsterhood and deadlines. But the caffeine is something I can control.) While I don't consume a lot of caffeine (I drink a lot of tea, mostly green, and occasional black tea or coffee) I've noticed in the past few months that black tea or coffee in the evening will actually mess up my sleep cycle, which is new and unexciting. And I did NOT react well to the chai I had on Monday, or the coffee Sunday afternoon.

Anyway, after 72 hours without my drug of choice, I am feeling the effects--those headaches, I tell ya. Stuff is vicious. And I appear to be coming down with something, given my absolute failure to perform at the climbing gym yesterday (

hawkwing_lb had all my mojo. Don't ask.), the pain in my neck, and the occasional slight productive cough. No fever, though--I'm right on the money a degree low, just as I always am.

Basically, I'm going to putter and not set any goals. And hope my headache eases up a little. (Today's tea is an herbal blend with a little bit of green tea in it, so there is some caffeine, but not so much I would drink it for the energy boost. But it will probably take the edge off the discomfort, anyway.)

Cures what ails ya.

Or at least distracts you.

The Mythbusters attempt to polish, well... a turd.

This amuses me because "turd-polishing" is a common phrase bandied around SFF workshops, meaning the act of fiddling with the sentences and commas in an essentially broken narrative.

Even if you succeed, well. What you have is a high-gloss turd.

When two cats who don't like each other want to sleep on the same small wool throw, a monkey's foot works well as a Line Of Ignoring.
Collapse