A friend of mine is one of the folks involved in opening a new downtown late-night restaurant in your Fair City. Which debuts tonight! So hie thee to The Night Kitchen. Even though I've never been there, I am pretty sure I can vouch for the place.

(Guess what I making today?)

Preheat the oven to 300°F. Grease your pan--rectangular cake pan or loaf pan(s).

Proof the yeast. Bring the honey to a boil and cool it slightly. The honey should be warm.

Cream the butter and sugar together with a hand-held mixer until light and creamy. Add egg yolks, one at a time, and continue to beat until all is incorporated, then add the honey and sour cream and continue to mix. Add the yeast to the resultant batter; it's mostly for flavor. *g*

Beat the eggs whites to stiff peak. Sift together the flour, baking soda, baking powder, cinnamon, cloves, nutmeg, and salt. Fold the flour mixture and the egg whites, alternating, into the cake batter as gently as possible so you do not lose the loft of the meringue.

Slide the batter into the prepared loaf pans. Bake for 45 minutes-1 hour, or until a toothpick inserted into the cake comes out clean. Give it a little while to set up, then invert pans on wire racks to remove cake and cool. But not too much; it's best warm.


And now I really want to make piroshkis.

But neither they nor medivnyk are really On The Discipline, now are they? And I am, again. 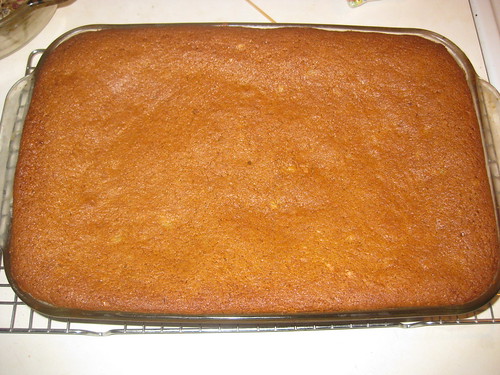 Best climbing night ever, more or less. There's a new nice little flaggy 5.7- or so that's all just elegant and flowing, which I liked so much I climbed it twice as a warmup, and then after that I sent my project 5.8 on the skywall. Yeah baby. (

Well, I had told myself I was getting two holds higher than I did before, which was four holds higher than I got on Sunday, and then I managed that and felt good, so I got one more higher, and tried for the next and came off--but by then I could see how to get to the hold after that, so I got towed back to the wall and made it up a few more--reader, I used a heel-hook, and it worked--first time in my climbing career--and then came off again. And got back on and came off one more time but by then I was one hold from the top and I was going to finish it if it killed me.

It didn't kill me. Clipping the quickdraw on the way down, on the other hand, very nearly did. I was amazed at how strong and balanced I felt for parts of the climb, and how easily I made some moves that felt absolutely terrifying.

By then, I had given myself a coughing fit from the sheer anaerobic output required, which persisted (off and on) until I got some hand got some mint tea with honey in me.

But I did also climb a new 5.9 (balancy, on an arrete, and I was actually quite surprised at how secure some of the very sketchy moves felt), and then I climbed and downclimbed an old standby 5.6 and finished off on another easy one on the skywall.

I am totally psyched. I feel like I may have actually learned something. Maybe I am finally starting to learn to climb.

With a little luck, I'll be able to drop some weight this winter, which will make those pesky overhangs much, much less miserable. (It's amazing how much you can feel any given five pounds when you are hauling it up twenty feet of overhang.)

Also, two cute boys hugged me as I was leaving. All in all, a banner day.
Collapse