726 words before dawn. Going back to sleep now.

All right. By popular demand, I have also uploaded the silly dog videos to Youtube. If they don't work for people there, I don't know what to say.

Also, I am in the process of uploading a third video, this one of Ace playing with his zombie soccer ball. In which you can witness my chagrin as he executes a perfect goalie stop on the ball.... with his face. OUCH! He seems unfazed, but I winced something awful.

He did do his amazingly ridiculous backwards bunny hop a couple of times, though, which was the point of the exercise.

I'll post that one later tonight--YouTube is still working on it.

In other news, the GRD and TBRE were alerted to A Disturbing Noise* at oh dark forty this morning. (I slept right through the noise. I was awakened by the dog, who is not a recreational barker, throwing a fit like he was telling the whole world that there is a BIG DOG HERE and STAY THE HELL OUT and the roomie descending the stairs and going out the front door.) By the time I made it downstairs with my cellphone and started checking outside the windows, TBRE was back inside and visibly rattled. She did not actually find anything, but police were called just in case, and responded, and we received a gentle reminder about dialing 911 as soon as you hear the murder committed, not calling the non-emergency number five minutes later.

Yes, we are those idiots in horror movies who descend the basement stairs one at a time.

My second encounter with the Manchester PD (the first was in 1999) proved as pleasant and professional as the first.

*apparently, it was a bloodcurdling scream.

And now, off to go hiking in the 8-degree windchill. Yes, I am on crack. 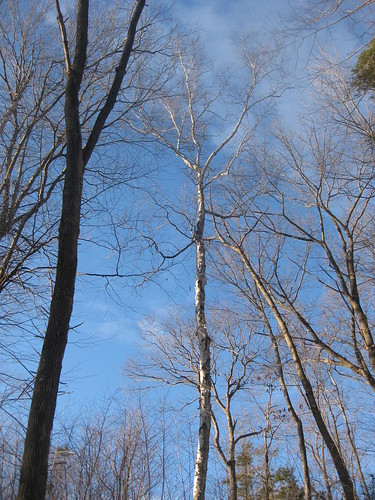 The rest are under this tag.

By the way, that thing aout not getting sweaty and getting chilled? Yeah, well, I pushed it on the way back to the car and froze my tuchus off. All better now though.

Here, have another GRD video, this one of him playing goalie with the zombie soccer ball in the yard. And, um. Fielding it with his face.