All I want to eat lately is bread with butter and harissa. Which, since it's usually oatmeal or brown bread, around here, and given the levels of vitamins C and A in chilis, may actually go a long way towards being a balanced diet. But I am still trying to break it up a little with the occasional clementine. 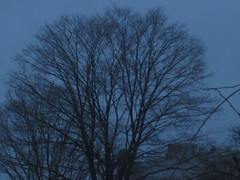 There was a marked lack of Discipline on Saturday (pizza and beer). Very satisfying, but in the long run not constructive.

The dog and I went for a two-mile walk in the rain this morning, because the back yard was far far too muddy to play ball. It's actually kind of nice out if you like rainy days (I do and he doesn't).

Here was the view out my bedroom window at dawn.

The house is a plague pit, and no chance of doing anything about it any time soon, between my schedule and TBRE's. Oh well: at least the dog doesn't mind.

Today, I start back up on Grail wholeheartedly.

Two weeks to the season premier of Shadow Unit. So if you wanted to catch up on Season 1 and Season 2, now would be a really good time to start reading. We're kicking things off on February 7th with The Unicorn Evils, a special double-length season opener.

For those of you who read this blog intermittently, Shadow Unit is a collaborative, interactive, semi-real-time hyperfiction environment following the adventures of a team of unrealistically sexy FBI agents (and their associates) as they attempt to track down individuals who have developed superhuman abilities--and all-too-human evil--as a result of a mysterious force known as the Anomaly. Contributors over the past three years are me, Emma Bull, Will Shetterly, Amanda Downum, Stephen Shipman, Chelsea Polk, Leah Bobet, Sarah Monette, and Holly Black.

Temperature today: 48 degrees
Tea today: Makaibari Estate Long Leaf First Flush. Really, this is about the best Darjeeling I've ever had.
160.3 miles to Isengard. I've been slacking. Or hanging out with Treebeard, maybe.

Today has been after the spirit of an adventure.

The whole world is blowing down outside. But I got 1561 words on Grail and got through a scene. I think I more or less know how the book goes now, although I don't have a good innate sense of its structure and spin, so I will be doing this one by pure intellectualization. Which is much harder than doing them by feel, but thanks to my own stubborn that I have developed the skills to bull through on brains and brawn when instinct fails. We're still on target to have this sucker done by the deadline, for which I feel an enormous sense of relief.

Bad news: I think the washer as well as the dryer is kaput. It's started making fairly dramatic banging noises on the spin cycle. Which means it's unusable, and we'll have to have somebody out to look at them and see if they can be fixed, but:

Good news: I just heard from

arcaedia that my signing payment for The Steles of the Sky is in house, which will come in exceedingly handy given (a) above. Also, I need to get the fan in my car fixed before it comes through the dashboard, and I have a whole bunch of bills to pay, which means:

Bad news: most of the paycheck is going to that. Alas! However:

Good news: Chill will be coming out soon, which means I will get paid for that, and for delivering Grail, and for Bone and Jewel Creatures, and The White City, so the long lean time of 2009 is finally coming to an end (I hope). Unfortunately, this means that:

Bad news: I really need to get off my ass and talk to an accountant. Add another thing to the to-do list. (I really, really wish I could afford to hire a part-time personal assistant. I badly need one, currently, for about three tasks that keep getting away from me. One of which is updating my *&^(&%^* website, since my Web Ghoul ran off and got other work.) However, in

pnh, no apostrophe, just for you)

Having survived the events of 2007’s Dust, the crew of the generation starship Jacob’s Ladder, marooned for centuries, find themselves once more racing though space. Unfortunately, the ship is badly damaged, large sections are out of communication with the central computer, and the highly augmented Exalt who rule the ship and its merely human occupants have lost the knowledge of how to select a destination. Antagonist Arianrhod is still alive, free, and a potential threat. Dealing with these problems involves epic journeys across a massive, poorly mapped spacecraft and confrontations with forgotten and suppressed relics of the past. Bear enhances the usual generation ship themes—social amnesia, decaying infrastructure, and mission-threatening grand calamities—with enough new flourishes, including a biotechnology-based class system and cruel experiments based on misapprehensions of Darwin, to keep readers happily engaged. (Mar.)

Bad news indeed: Dressage mare Blue Hors Matinee has been euthanized after a paddock accident. That breaks my heart.

However, for countervaling good news, I bring you John Barrowman pogoing in heels.

Yeah, I'm tired, and my fingers and my bad shoulder hurt like blazes.  The hip that's been bugging me since Friday's yoga class seems to have fixed itself, however.

I have made the executive decision to cancel that job interview tomorrow. The panic attack this afternoon was a pretty good sign that it was a bad idea. I think I am too old to go without sleep until November. Back to the drawing board.

Fortunately, today was a climbing day, and climbing is the best anxiety interrupt I know.

And there were four new routes! (Extra yay because that kept me busy enough that I did not throw myself at my &(*&^*&^(*&^(* project wall today. Since I hate my project wall, this made me happy.)

I tried all of them, sent three (one of them fairly well, one moderately well, one with thrashing) and just about killed myself repeatedly on the first two moves of the fourth one. I reall hope they rate that thing a 5.10, because I am putting it on my project wall list.

I think the other three are probably 5.8, 5.9-, and a solid 5.9/5.9+. That last one, which is a white route near the door, has a lot to teach me. Unfortunately, this means I am going to have to keep climbing the damned thing until I get good at it.

I reduced the complaint department's diazepam dosage by half; she seems perkier, and is being much more obnoxious, talkative, and pushy than she had been. More like herself, in other words. She's currently asserting her dominance by washing my wrists while I try to type. The litter box discipline has remained a lot better (though I hope Iam not jinxing myself by saying so). I think we'll try this regimen for a while and see how it works.

And now I think I will go fall over, because I need to get up in the morning and write another six pages of Grail.
Collapse