Oh,  Amazon. You make me tired.

Great Roy Orbison reference on the radio just now about--T. Bone Burnett on Studio 360 (who has a fabulous voice) quoting Orbison talking about "dragging his legend around."

Ain't it the truth? One of the weirdest things about telling stories for a living is seeing what people make of me from what I write, and how much of it is projection, assumption, or just plain invention. Becoming an auctorial construct in some ways is becoming a fictional character.

Right now, I'm dragging this damned book around. Or rather, I'm trying not to drag it around, which is harder. I am very very aware of my deadline (April) and the fact that it's got to be close to finished when I hand it in, given what else I have to do this year. We can't do a from-scratch rewrite without toplling the whole fragile scheduling edifice.)

So, because I hate deadlines and like to dispense with them by as wide a margin as possible, I feel like at two and a half months out, I should be finishing up my first or second draft of this thing. And instead, I'm a little more than halfway done. (I have 221 pages of what will eventually be a novel of around 400 pages in length.) Which is doable--it really is. I should be able to finish this thing inFebruary, at least draftwise, if I can get my head around it.

The problem all along has been getting my head around it. Getting the novel to come together in a shape in my head, so I'm writing it from knowledge rather than conjecture, as it were.

I kind of feel like that's starting to happen. It's coming together; it's developing intention and integrity and drive. But all of that stuff has to happen in the back of my brain, which can be encouraged but will not be chivvied along. Telling stories takes time. Like making bread--you can knead it (you must knead it) and it requires attention and work--but there are also long periods of time where all you can do is keep the drafts off and give it the opportunity to work. Some stuff happens at its own pace, or it doesn't happen at all.

It interests me that what I have written is actually probabl more like two-thirds of the book, structure wise, because I've realized there's an entire plot thread I'll have to go back and work in, and I'm going to have to figure out how to get some foreshadowing in here so major plot developments do not appear to come out of nowhere. Foreshadowing is a literary tactic we use to replace the fact that in the real world, there are often little hints of what's going on that our conscious minds don't concern themselves with, but the rest of us pick up.

(Some part of your brain kind of knows that your spouse is thinking of asking for a divorce, even before it happens. Some part of you suspects you are sick before the diagnosis comes back.) In literature, we have to put in those clues, and we have to do it subtly and with a sure hand so we don't give the game away, but so the reader isn't left thinking "You totally cheated!"

So really, I have 180 pages to write. I have to build the structure that'll hold the book up. And it seems I have to wait until that structure has completed itself in my head, because if I try to push it, I'll just be right back where I am now.

I am growing the bookloff; I just need a little faith here.

And now I will go read the new Robin Hobb, which I am supposed to be reviewing, and go back to ignoring my manuscript like a cat ignoring a mousehole.


I was just listening to Russell Peters interviewed on NPR, which was an interesting experience, and it left me thinking (again) about identity politics and constructions of race in some of the same uncomfortable useful ways that Wanda Sykes does. It's interesting to see the influence of Richard Pryor so strongly in comedians around my age.

It's a funny, chewy, prickly interview, which will probably be available on the Weekend Edition Saturday page in a couple of hours.

Spent today with friends hauling a cord of wood plus into a basement for immediate burning. And then I came home and made extensive use of my neck pillow/heating pad, made like all such good things of a sock stuffed with dry rice and lavender and mint.

Now, some of you may remember that my old one, which was stuffed with buckwheat, caught fire after ten years or so of loyal service. Ahem. Well, now I have the most awesome neck pillow/rice sock of all time, because mine is made from a striped knee sock, and not some sad old athletic sock.

TBRE has dubbed it The Slunk, and describes it as "Seussian." I think I need to embroider eyes. 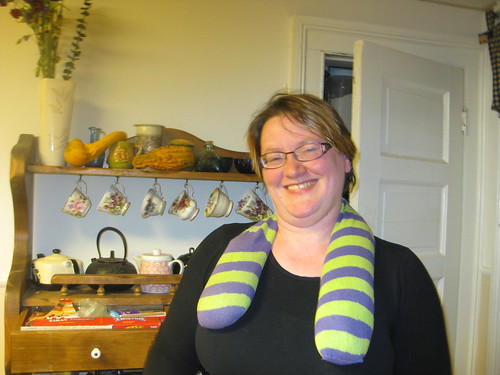