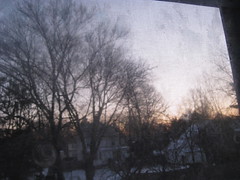 jmeadows took a pretty photo of sunrise this morning, but she went out on her porch to do it. Coincidentally, I got the same sunrise, but about500 miles north. And mine has a frosty window and a screen in it.

It was a nice sunrise.

And then I got up and ran, and handled some email, and read some slush, and had a deep conversation with that same

jmeadows about the sociopolitical and science fictional significance of Beyonce and Lady Gaga (no, really), and now I am allegedly working on the next scene in Grail or will be when I figure out what it's about.

From under my slunk.

827 words on Grail for the first writing session of the day. Now to break for lunch, and read some more of this thing I keep getting distracted from reading.

Hopefully when I get home from climbing tonight I'll be able to fill in these bracket notes I'm inserting with reckless abandon, because right now I need something interesting for these two characters to talk about long enough for the man with the gun to arrive and kill one of them. And I also need an interesting entrance for the man with the gun, if it is even a gun.

I think I've still got a bit of post-novel ennui going on from The White City and The Unicorn Evils. Ideally, I would take a week off and watch a whole hell of a lot of moderately bad TV to bring my brain back online. I might do that anyway, despite the deadline pressure. I'm doing just about everything I can to hothouse this book, and  I can fill it simmering away back there, but I find one can only hurry the creative process so much before it turns on you and rips your face off.

Today's other burning question: how many times can I listen to one ancient U2 track before going stark, barking mad?

coffeeemYeah. You actually did hear that right. The World-Fantasy-Award-nominated writer Emma Bull, author of such absolutely legendary novels as The War for the Oaks and Bone Dance (also notable for having been one of three or four writers who invented an entire subgenre of contemporary fantasy back in the 1980s), and the Hugo- and Sturgeon-Award winning writer Elizabeth Bear (that's me!) have written a novel together. And we're giving it away for free on the Internet Sunday night.

It's called The Unicorn Evils. I think it's pretty good.

It's the latest chapter in a thing we have variously referred to as a virtual television show, an interactive semi-real-time hyperfiction evnvironment, and fanfic for a TV show that doesn't exist.

What it is when we're not failing at marketing is a serial shared-world narrative optimized for the internet. Imagine Wild Cards if you could talk to the characters as events play out, and occasionally influence the course of events. The setting is somewhere between Millennium, The X-Files, and Criminal Minds, with touches of The Man from UNCLE. Which is to say it's about a group of unrealistically sexy, ubercompetent FBI agents attempting to protect the innocent from the worst monsters imaginable, with hints of evil conspiracy.

Unless that's not what's going on at all.

Over the past three years, we have generated well over a million words of donation-model online serial novel. It's all still there, and it's all still free. There's a wiki, and on that wiki the fans have generated a "Suggested reading order page." Because there is a lot of content in a variety of places and it can take a little while to get the hang of it.

I'm telling you this for two reasons. One, because now is a great time to start reading what I think is one of the coolest projects I have ever been involved with.

Let me say this outright. I love Shadow Unit. I want people to read it and love it as much as I do, and come hang out in the thriving fan community, and tell all their friends how much they love it because it's just that freaking cool. I am, more or less, doing this for free.

That's how much I love and believe in this thing.


And the other is because starting with this season, we're changing the format a bit.


Well, it's no secret to anybody that I am overscheduled lass. And I am not alone--the majority of my Shadow Unit co-conspirators* are also behind the gun of, well, getting food on the table and the wolf from the door.

To put it frankly, we're all overscheduled as sin.

So we're revamping our program schedule. We've been providing free online narrative just about every single Sunday (with the exception of four months or so, during which there is still intermittent content). The free and the Sunday are not going to change, but the "every single" part has become oppressive, so we're dropping back to something more like every other Sunday, with the big chunks of narrative happening every two months instead of every month..

This will help all of us, especially those of us with (multiple) books due this year.

The new schedule can be viewed here, on the Shadow Unit BBS.

Yeah, well, we knew it was a big project when we laid down on it.