Well, no sign of the plots of "Dolly" or the Secrit Projekt yet, and I just heard from Anne-my-wonderful-editor that she needs the final version of Grail by mid-July (and preferably earlier). Please note, I do not yet have an edit letter on the Very Bad Draft I sent her. That's actually kind of a relief, as it means I get to have another week of trying to think up plots before I have to dive headlong into revisions.

Of course, there's also A Reckoning of Men to finish.

It's a good thing I'm superhuman.

I also came up with a title for a sequel to Smile, which doesn't need a sequel, and isn't even written yet. I tell you, brain. At least I know you're working.

Also, I was awakened this morning by a nightmare in which

stillsostrange and I were visiting

deliasherman at their airy chateau in the golden hills of France. Doesn't sound like a nightmare, until I tell you how we were being stalked by vampires and trying to get into the carriage before nightfall.

Just as we were about to leave Amanda came to see me in the kitchen and turned into a vampire and I had to hit her in the face with a cookie sheet.

She was unimpressed. But I woke myself up before she could eat me.

Guess what the elves brought in the night?

I'd tell you to order this book, or this dog starves, but apparently they're all sold out except a couple of copies of the limited edition, and really, who can tell that that's a dog? 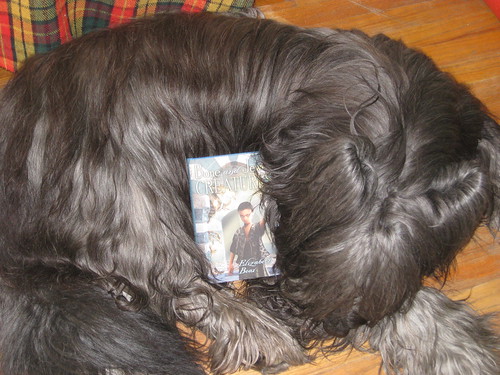