Climbing at Ragged Mountain today with Jeff and Alisa. We set three routes; I climbed two (Wet Wall and Knight's Gambit.) I did not get to climb Broadway, the third route, because we ran out of daylight. Some other time perhaps. I also tore both sides of my (elderly) cargo pants high-footing. Ahem. Wear pants that stretch when you expect to be putting your foot above waist-level, my friends.

I'm pretty darned proud of myself: Ragged is, I think, Connecticut's biggest wall. It's something like 28 meters (92 feet) of traprock (basalt), and it's intimidating as hell. I've managed to get up a route on the slab before (the slab is that giant leany slumped rock in the left of some of the photos) but never made it to the clifftop, in two years of trying. 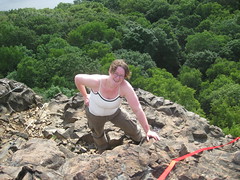 A bear in her natural habitat: New England. 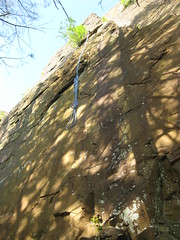 This is not how you set a rope. Ahem. But it was only ten feet up and I bouldered up to grab it and then downclimbed, and did not die.

Because the shots are foreshortened, and the top of the cliff is set back by a little ledge, it's taller than it looks in these. There was a good fifteen feet left to climb in that shot, even though it looks like I'm finished. 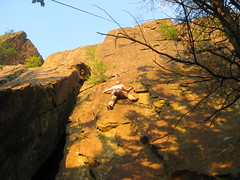 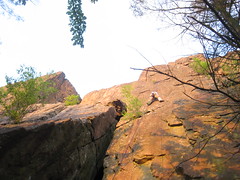 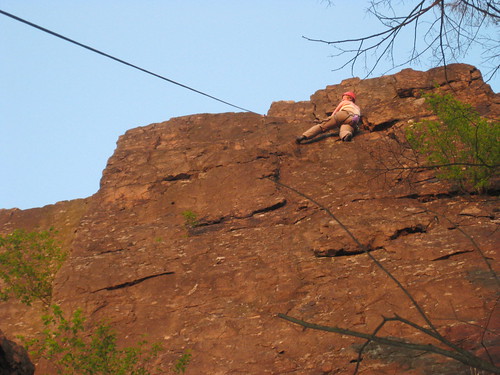 And yes, the correct answer to "Does this harness make my ass look fat?" is yes.

One more shot from Ragged Mountain, giving a sense of the scale of the problem... 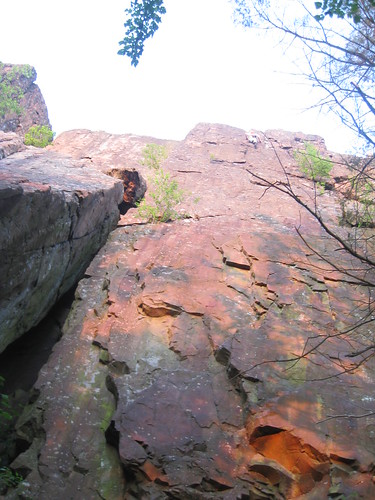