First run of the year--possibly the first run since last April, which is the last time I used my running tag. Ooops.

3.2 miles jogged in :49 with bio breaks for the dog (averaging 15 1/3 minute miles over irregular terrain), with no cardiovascular discomfort. By the top of the second hill (the biggest one) my calves were killing me, so I walked up the third. Jogged up the next two, though, and actually mostly ran (slow run) the last half-mile, which is downhill. Walked the last block, as a cool down.

I'm kind of geeked that a 5K run is pretty trivial, at this point, since I really am out of training. (I can manage dog, icy sidewalks, and jogging: pick 2.)

I'm pretty psyched at my cardio condition. I guess the yoga, climbing, and walking have sufficed to keep the old lungs and ticker muscular.

Jogging means that I'm moving at a pace close to the dog's natural lope, so he doesn't tug at the leash and he actually gets a workout equivalent to a fast walk: if I break a slow run, he has to trot, but his trot is fast enough that I annoy him again by being slow. Two legs are slow. (Actually, we're the best long-distance runners on the planet, and one of the better sprinters, but trotting dogs can outcompete us in their natural gait.)

Today is a Rest Day. Possibly the rest of the week is Rest Days. Or at least Reading Days.

Once I sluice the sweat off, I plan to practice guitar and do a little math (still on planar geometry, which I have always liked) and try to catch up on some reading.

There will be climbing later, and a PT appointment, and I have to see if I can do a headstand again. (I managed one against the wall two weeks ago, before I took a week off because of the cold. I'm pretty pleased with myself for being an overweight nearly-40-year-old woman who can manage a headstand and a 5K run. And a cartwheel. Next goal, handstand.)

There might be more Farscape tonight. In the meantime, tea.

tea today: Upton's Peach with Flowers, a perennial favorite. With a touch of honey, because it brings out the peachiness. 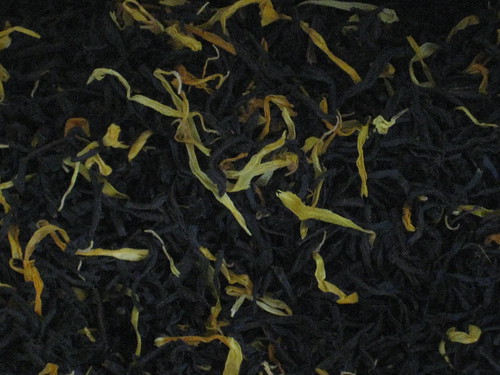 teacup today: University of Connecticut mug I bought in oh, 1989 or so. They don't use that logo anymore. Man, I wish I knew then what I know now. Wouldn't it be nice if life had saved positions? 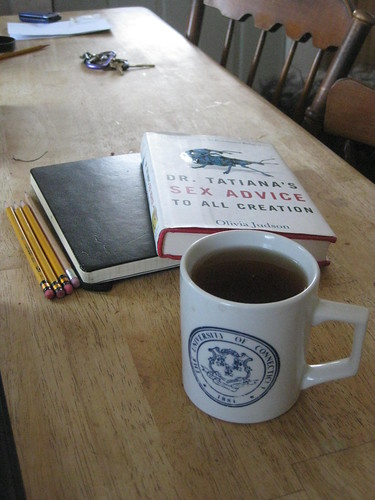 It's been interesting to watch Madison Avenue figuring out the trick to marketing to Gen X as we enter the coveted demographic. Because pretty much, we were raised on plastic toys that looked cooler in the commercials, and we are on to the fact that the shit we are buying is not likely to be any better than the other shit, no matter what the ads tell us.

However, if you amuse us, we will buy your shit, because we like to reward people who amuse us, and we needed some shit anyway.

And if your shit, wonder of wonders, turns out to actually be good shit? Shit that actually works as advertised? We will seriously tell all our friends, kind of amazed.

That said, Kotex, I dig your whole cynical gothy tampon thing? But clotted blood does not actually look better on lime green plastic than it does on beige.

Memo to me. The finger-picking pattern in "Landslide" runs across two measures.

This is the source of all your confusion. Well, that, and Lindsay Buckingham being better at this than most people.

...well, that, and the necessity of getting into the G/B with extreme speed and accuracy. Especially the B string, because you need it immediately.

Also, if I could just get a halfway passable F#m, I could bloody well play "The Long Way Home," which would make me happy. Unfortunately, barre chords? Still the Devil.

In other guitar-related news, guitar before climbing. "Sequence and order, time and stress. These things are very important."

And on that note, off for errands and falling off rocks.

sovay and others: Roger Ebert informs me that something wonderful is now available on Netflix Watch Instantly.