Tea today: I'm starting off with Upton's Makaibari Estate Darjeeling Long Leaf, but since there's only enough of that for one cup, switching to Carribean Blue Lady after.
Teacup today: Bats of North America 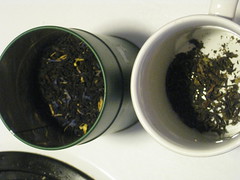 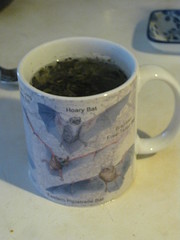 And for those of you who wanted to know how the risotto came out: 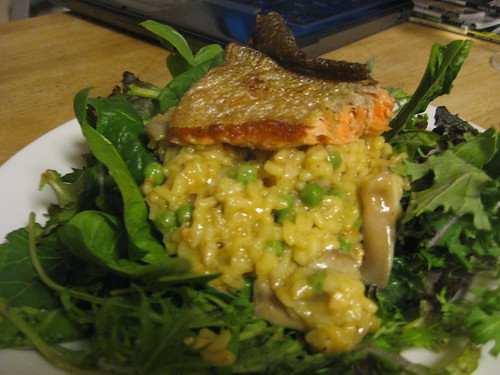 No writing today: reading, guitar practice, thinking about the novella I start on Monday, climbing, and possibly a Pete Seeger (and friends) concert. ;-)

And now, back to that devil F#m.

I went to church tonight.

This is not a usual occupation for me, but this was a special occasion. You see, Pete Seeger was being appreciated at the Cross Street AME Zion Church in Middletown, and it seemed like a good thing to do.

Some of you have probably figured out that Pete holds a special place in my heart. The title of "Gone to Flowers" is a clue, after all. The first concert I ever attended was Pete Seeger and Arlo Guthrie at Tanglewood, and I have very vague memories of it, but apparently I was captivated. (I was... probably three years old?)

Anyway, Pete is 91 now. He performed a few songs, and told a few stories (I say "performed:" he led the sing-along), and more of his songs/songs he popularized were performed by various choirs. My favorite was "Guantanamara" as performed by Connecticut's Only Mariachi Band, Fiesta del Norte, which included possibly the world's only mariachi alto sax, as played by young Ivan Hernandez.

Pete Seeger is a personal hero of mine: he seems to have developed a reputation as Mostly Harmless in his old age, but this is a man who was blacklisted during the McCarthy era, who was sentenced to ten years in jail for refusing to testify before Congress, and who was once stoned for daring to appear in concert with Paul Robeson. He's an environmentalist, a human rights activist, and a goddamned commie.

I'd say he's a living legend and a national treasure, but that would be damning with faint praise.

Pete Seeger is a human treasure.

He also has the gift of being able to give strength to others.

I haven't been feeling so great lately, honestly. It's been a bad few years in some ways, and a bad couple of days, and I've been feeling like I do more harm than good. Not for lack of trying, maybe, but because the problem with the real Omelas is that you can't walk away from it. It's everywhere: it's no so easy to avoid.

And let's face it: the last decade or so has not been real encouraging.

But Pete made me feel like not just as if I shouldn't quit trying, but as if it were actually worthwhile to keep up the fight.

I drove home in the blowing rain, listening to Matt Nathanson and trying not to cry so hard I couldn't keep driving.

The work is not upon us to complete, but that isn't exactly a goddamned excuse, now is it?

matociquala: he has such a great theatrical onus of history upon him, after all
[23:36]

tanaise: about the guy who goes to sleep and wakes up as conan
[23:39]