Cannot stop listening to Mark Knopfler's "What It Is." Apparently Sebastien is in a crumbling citadels in Scotland kind of mood. 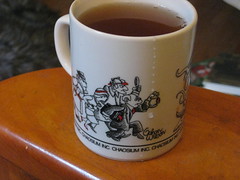 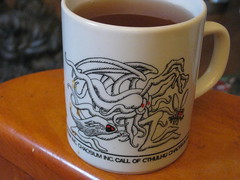 I overslept, you see. So exercise is also getting put off until this evening, when there is meant to be rock climbing.

However, I did get another 2,000 words before bed, which means I have about a third of a novella here. I wound up writing so much because I was trying to get to the smut, and instead there was endless smut negotiations. Sometimes the characters just won't cooperate.

Anyway, it's back on the treadmill now, and we're trying for another eight to twelve pages. Because The Deadline Cometh.

I should probably shower and ingest some calories now. (I first typed "injest," which indicates to me the eating of a sutteltye, perhaps?)

And on that note, clean hair and more tea and work and words. Probably even in that order.

3,000 words today. Tomorrow is probably a Rest Day, as I have a social commitment. But that's 50 pages done: I guess I'd better actually figure out what the conflict is here shortly.

Well, I dunno how I'm supposed to manage an impartial review after that. Aww, you guys. *sniffle*

Ahem. ...being a review of sorts of Criminal Minds 6x18, "Lauren," written by Breen Frazier, directed by Matthew Gray Gubler.

They pulled it off.
Oh, Show. CBS hands you piles of shit, and you make the flowers grow.

*(The quote, for everybody who asked, was "The secret to lying is to believe with all your heart. That goes for lying to yourself even more than lying to another."

Which is the second and third lines of Seven for a Secret.)
Collapse