Tea today: Upton's bancha with some ginger thrown in
Teacup today: File this! 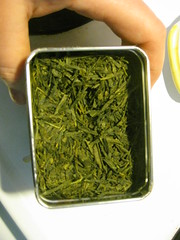 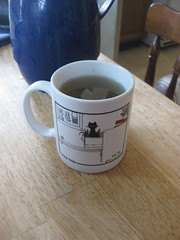 There's a to-do list today, but afterwards, there must be words. Ahh, unscheduled day. And it's gorgeous out.

Tomorrow, going to do some digging in the garden. *g*

I have a quandary. I have reached Minas Tirith with my almost-namesake Pippin. Do I turn around and go home, or follow Aragorn to the Morannon?

I guess I'd better go to Mordor. For one thing, if I don't, my tag is a lie. And anyway, I overshot by two miles. (Probably more, but I am giving myself two miles for yesterday's skiing.

For another, according to the Eowyn Challenge webpage, the Host set out from the Gates of Minas Tirith on March 18.

Totally the first day of spring, observed. It made 68 degrees, and was beautiful.

Meanwhile, I seem to be kind of stuck on what happens in the last bit of ad eternum. It might help if there were any external plot in this thing at all, but it's totally a character story, and I don't know what to do to move it along.

1,300 words on ad eternum today, despite the fact that my neck is killing me. Officially too old for falling down mountains, although if a day without a bruise is wasted, going by average bruise-to-day metrics, I am set for the rest of the month. I should write 700 more words tonight, but that might not happen.

Still working on my barre chords.

In other news, Paul Simon is not now that strength that in old days moved heaven and earth, but he still occasionally comes up with a good lyric: "Once in August 1993 I was wrong. And I could be wrong again."
Collapse