So I was just kicking myself about failing to get my act together and take the dog for a run this morning before nine... and then I remembered what I did yesterday.

Right. No pressure, Bear. Eat your breakfast. Read a book. Like the one you've been carting around for two weeks and not getting anywhere with. 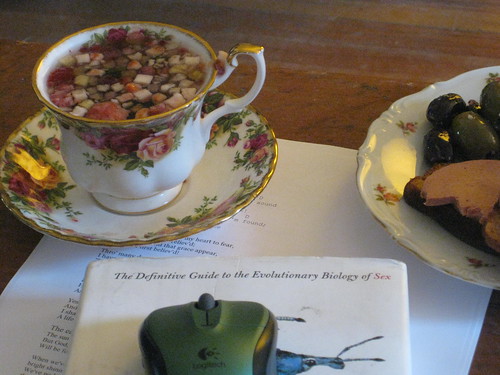 So if for some incomprehensible reason you are a creative person who does not follow Warren Ellis' blog, here are some posts on the process of creating a new project with Mike Oeming (of Powers fame).

Half Moon with Mike Oeming: First Notes
Half Moon: New concept art
Half Moon: zeroing in

Seriously. I'm not sure what these posts are doing to my amygdala, but it's important.

I got nothing. I'm trying to figure out the plot for "Underground" and enjoying the post-novel ennui.

I actually have had some of those them there epiphanies about creative work lately, and I feel like I'm edging up on something important. All of it is stuff I knew--or know--but it's all somehow clicked together in a new shape, in that way that koans do when you achieve a new level of understanding.

I've been thinking about the necessity of writing your passion, and about how you have to not be scared of the story--even though the only stories worth telling are the ones that are terrifying. Because the truth is scary. I'm also thinking of the necessity of this thing I don't quite have words for: it's like "tell the truth but tell it slant," but that's not quite it. And it's also that the specific is universal, but the general is didactic.

And it's also about letting go of stories, and letting them be what they are, rather than what I wanted them to be.

And trusting them, I guess, to be what they are.

Maybe this is unconscious competence finally sneaking up on me?

Or it could just be that I'm getting lazy....
Collapse