Tea today: Upton Tea Arya estate 1st fl SFTGFOP1
Teacup today: Tetsubin cup, which is made of cast iron for those who were unaware. They feel very nice and alive in the hand when full of warm tea. (I assume there's a technical term for the cup as opposed to the pot, but I don't know it and on this day, I cannot be arsed to google.) 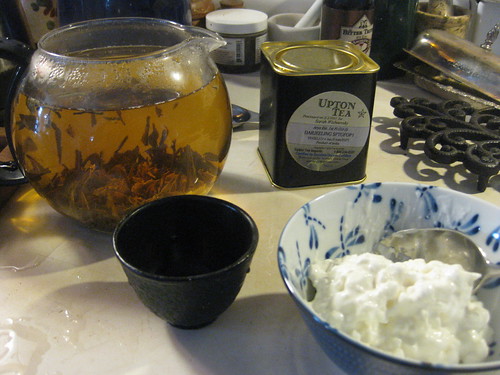 Today is a Rest Day.  And this time I mean it, even if I did already send an email to my editor, and do a bunch of research for The Shaded King / Shattered Pillars. Ahem.

Yanno, Google Chrome would be a much better browser if it's url-bar text recognition algorithm worked as well as Firefox's. I find I actually am using both.

I am also looking at my work schedule for the next six months, and with one thing and another, I've realized that everything big I have to work on between now and November is Eternal Sky world stuff.

I'd like to get some more short fiction done--specifically "Spellslinger" and "Steel Monkey," because I have solicits they could fill, and because the stories are awesome, at least in my head. And I'm looking at this list, and...

...it's getting shorter. Shorter!

Although I will be doing page proofs in Ireland, it looks like. (I'm stopping off there to visit a friend on my way to Sweden. Anybody know if there's a bookstore in Dublin that might want to host a trio of itinerant SFF authors for a signing?)

Also, the song "Solitary Man" has been following me for the past two weeks. In multiple versions, mostly the Johnny Cash and Chris Isaak. I just wanted this on the record so you'd know which popular tune to look at if I turn up in an alleyway somewhere. Amazon appears to have the (awesome) cover art for The Tempering of Men.  Which means now, so do we!

I like the troll blood spatter from the shield punch. Although I wouldn't be going into a trollfight in an Arctic January wearing the male equivalent of a chain mail bikini, me...

(I guess he's using his dagger because he left the axe buried in the skull of some previous troll...)

ETA: While I'm self-promoting, if you missed it yesterday, Facebook me fan page will have *only* work-related updates--finished books, new releases, contests, etc: http://www.facebook.com/pages/Elizabeth-Bear/191980437504267

Just found out that Chill is a contender in the BSC reviews annual bookfight, currently just barely holding its own against The Wicked Mary Robinette Kowal's Shades of Milk and Honey.

Vote early, vote... well, really, only vote once. And vote your heart, of course.

I know what's in your heart....
Collapse