Yesterday, I went to Logee's with friends. (Logee's, for those of your unfamiliar with it, is a southern New England institution, especially in wintertime. It's a nursery... but it's a nurdery that has allowed its greenhouses to be absolutely overrun with giant plants. Here's my flickr set, most of which is from last year's visit.

batwrangler has much more awesome photos. I love that place.)

We saw many amusing and fascinating plants, but the one that occasioned the greatest comment from all was this alien creature: 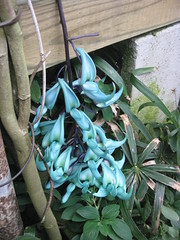 (We had a long discussion over what color it was, exactly: cyan? turquoise? teal?)

This house, which is very dark, has been the death of almost all of the plants that flourished in the sourh-facing windows of my old apartment. Determined to have at least a few shade-tolerant pieces of foliage around the place, I came home with a couple of begonias, an African violet of a positively intense shade of, well, violet (the photo does not do it justice) and...

...a plant apparently imported from Fortune/Grail: 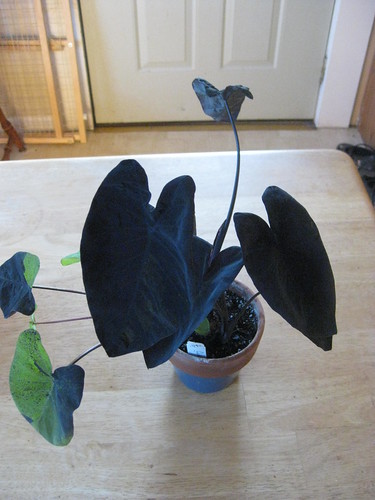 Yes, it really is black. Not dark purple, not dark maroon, but black. It's a Colocasia esculenta, which is to say a taro. And this particular individual is a genetic sport. It's supposed to have green leaves speckled in black, but this specimen (and several others on the shelf with it, which I assume were clones) had this striking coloring.

Of course I brought it home. It's research!

I promised to report back on

thatpotteryguy's bread pan. Verdict? Very good bread, but I need to do two things next time: (1) bake the bread longer, because the pottery shields the lower half of the loaf from the oven heat, so the crust was a little light, and (2) grease the sides of the pan. The bottom released just fine (I made sure there was cornmeal in the bottom of the pan) but I had to pry the sides loose with fork and knife, terrified the whole time I was going to break the pan. 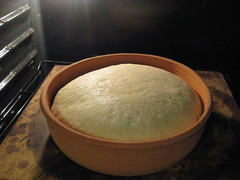 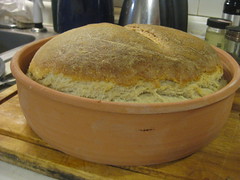 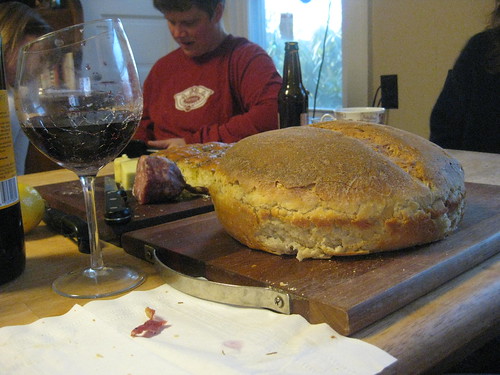 In conclusion, yum. (It's an all-white sourdough loaf, and normally I would have divided it into two loaves, but it seemed like the pan would hold it.)

And now it's the next morning, and time for tea. 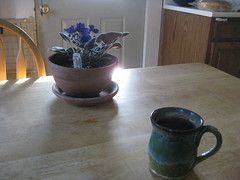 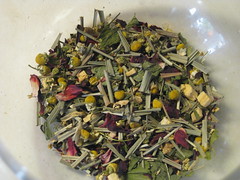 In which certain things are revealed, and the decision is made to conceal others.