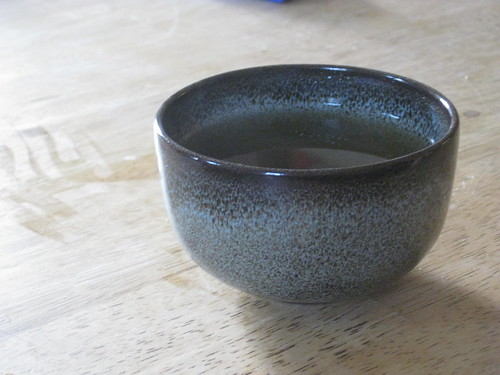 Goals today: Mail the taxes, which I have been putting off because writing the check makes me Sad. Write another 8 pages of Too Many Necromancers. Possibly more, if it's going well.

If it's not going well, bugger off and read a book after quota gets done. Which looks likely right now, because my head is full of wool.

Oh yeah, and practice guitar, as I forgot yesterday.

As soon as I crawl out from under this pile of foggy and stupid, anyway.

I just had an epiphany in the shower.

I think I've been doing something wrong.

I have this tendency to do stuff in books that I think is totally cool, but which nobody else ever seems to notice. Due to a recent conversation, I'm thinking of all the biculture stuff in the Jenny books (everybody in them is the product of at least two cultures, which I had intended as a Relevant Thematic Strain (definitely not a comment: possibly an observation or a question) regarding what happens when two cultures meet and interact, given Hugely Advanced Alien Cultures and all that.). And also--now that Grail has been out for a while--it's becoming obvious that I did it again, with the iterating (and collapsing) bubbles of adulthood as-seen-from-inside-and-out. (Hint: Head is the only real grownup in those books, and somebody had to make ser. Although by the end of it Tristen is getting there.)

I love this stuff. As anybody who's read my Criminal Minds meta posts has probably figured out, it's one of my favorite things about fiction.

I've been trying to figure out how to make it all more obvious to everyone: a game anybody can play. And what I realized this morning is that that's probably stupid of me, because really, what I ought to be doing it just keep those games for my own amusement (hey, it lends structure, and it keeps me amused) and let them be opaque as they want to be, because what most people care about is just the damned story and the characters and the thematic and emotional payoff. (Which I also care about, don't get me wrong: for me, characters and decision-points really make or break a story.)

This reminds me of a possibly-apocryphal conversation John W. Campbell supposedly had with Theodore Sturgeon re: McCarthyism. But I think in the end it's a good thing to know.


State of the Honeydew:

Did you know Al Stewart has other songs? Some of 'em are pretty good, too.

I've spent all day on the orbital mechanics of a fantasy planet. This had better be the greatest race-the-sunrise chase since PITCH BLACK, is all I'm saying.

Exercise: yoga. the dog did not get walked because I think his bad shoulder is acting up. Poor dog.
Mean things: really? That much UV output? ...awesome.
Things not actually needing names:  Beta Persei A, B, and C.
Things that did get named: --
Darling:  --
words Word don't know: --
words I'm surprised Word does know: --
Tyop: --
Collapse