Al Stewart and Josephine Baker are following me around this week.

Got up, took the dog out, did some yoga (20 minutes of sun salutations.) Ate a food and started bread and did the dishes. La la la. Goal for the rest of the day: practice some guitar, and then finish this damned draft of Too Many Necromancers.

I shall not sleep before the draft is done. Even if it's just a slurry of bracket notes and WTF. Because I really have no clue how to finish this thing. I've got the wrong end of it somehow and I have to do a tricky trick and flip it around while making it look like I meant to do that the whole damned time.

In order to keep you entertained while I am engaged in Death Race 2011 (now with 111% less DavidCarradineandSylvesterStallone, not to mention horrid 70's eye makeup), I bring you the second half of "Boojum" from Drabblecast. With a second and equally nifty image of the Lavinia Whately. 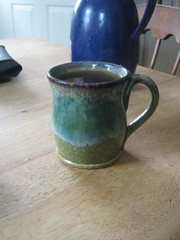 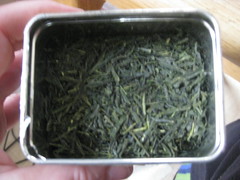 (tea photo is blurry, but you get the idea)

And now... This Draftus Must Die.

Here's where we start for the day:

Huh. Okay, you know what? I'm calling that a draft. It's not a good draft: it's full of holes. But that's why they call it a draft.

And it probably only has two days' work in it to make it a finished story, which is good enough for me, because if I have to do this anymore right now I will cry.

Tomorrow is a Rest Day. And then I will see what I can do about getting those books mailed before I leave for Texas, eh?