I am in Ireland, and have already met a very wet white dog named Pixie. As I pointed out to

stillsostrange, it is an excellent thing that she was not named Pooka, because that might have been a bit much for a rocky windswept beach and 24 hours with no sleep.

The flight over was not actually horrible, or was as un-horrible as seven hours in a middle seat in economy class on a redeye can be. I did not manage to sleep: neither did

stillsostrange, who was jammed into the window seat and who, at one point, I threatened to pad with pillows and sleep upon. But the cabin crew was lovely (we has a flirtatious, sarcastic Spanish flight attendant (male) and the in-flight meal was stir fried beef that actually tasted vaguely of ginger).)

The horrors of the flight were made worthwhile, however, because we passed far enough North to get an actual white night, or at least a violet one. The sun did set, but the colors in the sky never faded, flaming in deep ember shades of orange and vermilion. After about three hours of semi-darkness, the most amazing thing happened: the sunset became a sunrise. And not just in technical terms--all of those reds and bruise-violets and flame-oranges gave way to peach, gold, lavender... and the sun came up again.

Simply lovely. Sadly, I did not have the presence of mind to photograph the sunset portion of the program. But here's what the sunrise looked like: 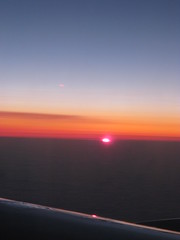 I've been further north than Dublin--Glasgow--and soon will be even more north than that. But I think the airplane a little under Reykjavik was technically my furthest North so far.

Nevertheless, it was with great relief that we arrived in Dublin.

After some confusion, we found the proper bus (or motorcoach) and made our way to Balbriggan, where we located

hawkwing_lb's house, met her cat, showered, ate toasted cheese sandwiches, and then re-embarked for a walk, as neither of us were relaxed enough to be sleepy yet. We walked through the village of Balbriggan and down to the strand, there to meet the Irish Sea, place stones on the cairn of the Sailor's Grave, encounter many fine dogs, hike up the headlands, observe two grey herons (one flying, one fishing) and at least four Irish brown seals (very distant looks, those), and look at some passage tombs.

If you pictured a cyborg and a minotaur hauling rocks up this bluff to build a weird little church full of books and statues, you wouldn't be far off: 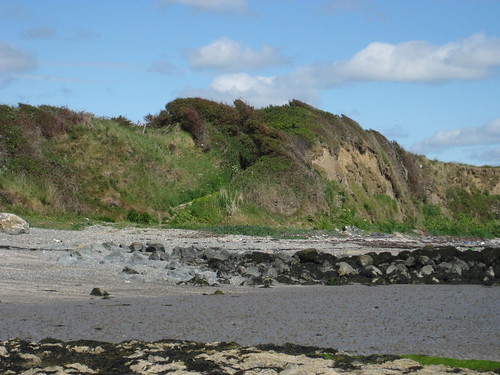 And you could decorate this bit of strand with some giant animal bones and be in pretty good shape: 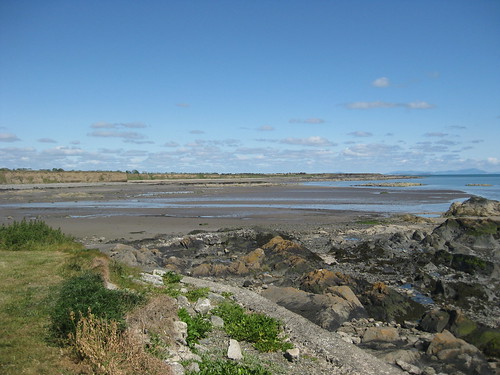 The fine weather was visibly over by then, so we ate our chicken sandwiches and splashed around in the sea a bit before walking back.

The Irish sea smells different from either the Pacific or the Atlantic--the Atlantic is brinier and thicker-smeller, at least in New England, and always has that rankness of tides and salt flats. The Pacific smells heavier and colder to me, with an ozone tang. This was a milder smell, clean and sharp, reminiscent of fresh oysters.

Then we came back to the house, and there was much napping. (Still is, in some quarters.) After dinner, there will be pub and Irish music. I feel a pint coming on. Especially since by then I will have walked six miled today, not counting airports.

Right now, I'm going to work on one of these short stories I have due. I did get my OWW review done on the plane/in Newark, so that was like victory. (And two books read for review, also! I abandoned the third, as it did not please me. Dear authors: just say not to raven tresses.) 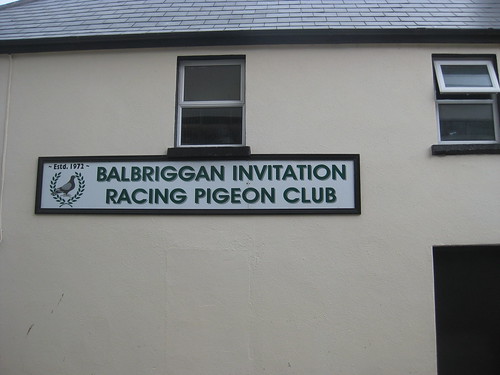 Darn you! Story, why are you insisting that you are about gay boys when you were supposed to be about gay girls?

At least you gave me a title, although I find it hard to believe that there are actually only three Google hits for "The Salt Sea and the Sky." But that's okay, I'll take it.

I suspect that you are going to win this one, especially since you are refusing to generate female characters currently. Maybe they can be really butch gay girls?