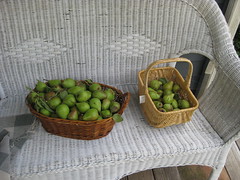 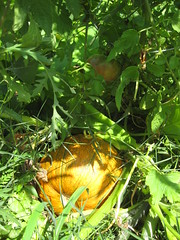 There's gonna be some pear butter made this weekend, uh huh.

1,792 words today on a critical essay tentatively titled "You're on the Global Frequency," which is (loosely speaking) about the Everyman Hero In Selected Works Of Warren Ellis.

This does mean that technically speaking, I got paid to spend my morning rereading FELL, yes. Oh. The hardship.

It's about halfway done, and I have to actually reread Global Frequency before I finish it. Thank heaven for overnight shipping, since the deadline is kind of tight.

I think it's good work, and I'm pleased with it. And it's nice to be doing some actual paying work while I wait for my fiction brain to grow back.

I've decided that I can, in fact, have the entire month of August off, if I need it--though I do need to turn in a critique for the OWW and my

Even with a move in store (looks like we're buying that house, barring disaster--I will soon be a resident of the Commonwealth of Massachusetts and eligible for her healthcare system!), a couple of cons and Viable Paradise (looks like I will be going to WFC after all, seeing as how they nominated me for a major award and all), that still gives me four months to write 116,000 words on Shattered Pillars. No sweat, really.

(I do have.. what, two? short stories due, one in September and one in December--but I have started them both, and am just really waiting for my brain to grow back so I can write them without hating them.)

And if I get inspired before then, well, so much the better.