My Armadillocon schedule is as follows!

Fri 6:00 PM-7:00 PM Trinity
A. Allston, E. Bear, J. Hall, A. Martinez, J. Rountree*, D. Sylvan
This subgenre label has been around for several decades, and it's being applied to stuff now that would have been out of bounds in the 80s. What does it mean, and what does it include and exclude?

Other than that, well... in the immortal words of Joni Mitchell, "If you want me, I'll be in the bar."

Look for the loud table.

The Discipline, an occasional series.

Warning: following discussion of fitness and weight management regime may be triggery to some people. Those people should page down now.


Please note: I support the right of every single human being to live in the body they are comfortable with without outside social pressure to change it to fit some societal norm or plasticized ideal of beauty. This is about my body, and the fact that I want it to climb 5.10 and run up hills with fifty pounds of climbing gear in a daypack for, ideally, the next 15-20 years.

I'm not looking for advice, nor am I offering it. I am reporting my own fitness program, as may be useful to or assuaging to the curiosity of others.


So as those of you who've been reading for a while probably know, since 2006 or so I've been on a fairly serious program to get fit, restore the damage I did to myself with crappy lifestyle choices due to depression and misery while living in Las Vegas, and generally go from being pre-hypertensive and on a fast track toward my hereditary destiny of diabetes (as well as unable to stand up out of a chair without grunting): to running five miles in an hour and looking more or less like this only greyer and wrinklier again: (This first one is me dressed up as a Ravenclaw for a Potter party/LARP**. Back when I was kickboxing three times a week and benching 140. Damn, look at that neck. The second one... god, I was 26. WHO IS THAT CHILD WITH MY NOSE?)

This goal goes by a number of names, including Project: Valkyrie and The Discipline, and involves significant dietary discipline as well as daily cardio, strength, and/or flexibility training. I am concentrating on jogging, walking, kayaking, rock climbing, and yoga--with some bodyweight exercises--for these purposes. Between one and three hours a day, more or less, with occasional rest days--and I try to walk some, even on those.

The dietary aspect of the Discipline boils down to an average of 1500-1600 calories a day, although in order to keep my famine-tuned Ukrainian metabolism from adapting, that means that some days I eat 1100 calories and some days I eat 2200. (The 2200 calorie days are actually getting to be kind of a chore, as I adapt. Thank cod for whole-grain pasta.)

With a few exceptions, I am opting for protein--mostly dairy and fish--fruit, and vegetables, with limited amounts of whole grains and quote "good fat" unquote, with Lots Of Antioxidants and all the tea I can drink. I am taking a multivitamin supplement, a soluble fiber supplement, and a fish oil (sardine/mackerel) supplement. The multivitamin I am taking is formulated for vegetarians, and kicks in about six thousand times my daily RDA of B12 and B6. 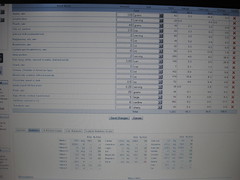 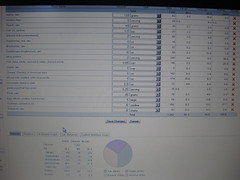 Yeah, that's a lot of protein. I'm aiming for 100 grams even on restricted days. The fat percentage looks brutal, but bear with me--it's fish and olive oil and nuts. Okay, and some cheese.

Because cheddar cheese is the staff of life, that's why.

Oh, my kidneys: I try to keep the protein under 20% normally--but with this calorie restriction that is a goal incompatible with the 100 grams rule--and what the hell. It's only for a couple more months. And it seems to be working.

A nice thing about mostly-removing refined carbs from my life (I'm not a monk. I still like cheesecake. I just only get dessert once a week or so, these days, and not too much of it. And when I'm off this thing*, whole-grain root vegetable muffins are coming back into my life on a weekly basis.) is that I've noticed that my moods are a lot easier to maintain. Considering the number of years I've been wrestling with that particular aspect of The Crazy... man, it's a fucking relief.

I hear you getting to "Sardines" and going "ick!" But trust me on this, I'm Swedish. What you want is King Oscar brisling sardines in olive oil. If you hate fish, you'll still hate them, but if you like fish they're really quite tasty. And full of calcium and protein!

And I am pleased to announce... we're getting there! Today I jogged 3.4 miles, more or less, and it was reasonably trivial--and yesterday I managed 20 seconds of handstand. (I cheat up with a foot against a doorframe, and I am doing the handstands against a wall still. However, it is now *one* foot against the doorframe rather than walking up it. And I can do a headstand (against the wall) by kicking up to it.

Last Monday, I climbed 12 routes in about 90 minutes--three crimpy ones, three overhangs, and the remaining six jughauls in laps until my forearms quit. My traps and delts did not forgive me until Thursday.

And I can do half an unassisted pullup. Soon I will try for a full one.

These are all personal bests. I'm pretty freaking pleased.

And even more significantly... I am conditionally off my anti-hypertension med. And if I can keep my blood pressure at 124/72 as of early September, it won't be conditional any more.

I'm also down to 210.5 lbs, post-workout pre-breakfast weigh-in (you bet I cheat for moral support) from a high in 2005 of somewhere near 290.  My goal is somewhere between 155-175, depending on what I see when I get down in that range. I'm 5'8" and heavy-boned and I pack on muscle like a hoss, so I want to see how much muscle I'm carrying and which pants fit when I get in the range before making any final decisions.

Lighter is better, for rock climbing, but I'm not willing to sacrifice muscle and health when I have the genetic potential to climb well just by being a fucking beast, as we say at the gym. (A good deal of climbing is technique and balance; another significant aspect is strength:weight ratio. So if I am significantly stronger than the average woman climbing, I can also afford to be significantly heavier--although it's harder on my tendons. But that is what tape is for.)

So, more or less, I am two thirds of the way to my goal. And I'm down into the range where every five or ten pounds makes a palpable difference in how I get up a hill, or a wall.

Also, I only have one chin, these days. And I'm a bad enough feminist that I have to admit... that does matter to me.

*I never actually expect to eat the absolute crap I did in Vegas again... but that was largely not my choice, frankly: I've always been a little bit of a hippie on the food front. But I am looking forwards to brown rice and whole-grain bread as a semi-daily event again, let me tell you. 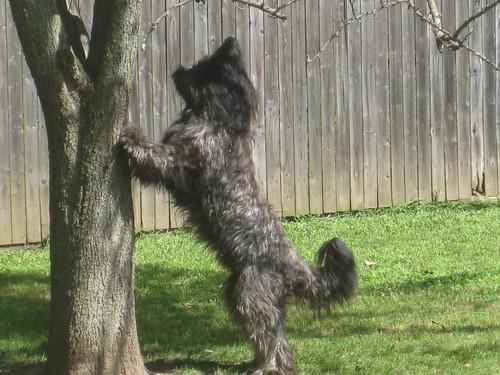 He would do that all day if I didn't make him come in the house once in a while.

Here, have some sunset, too: 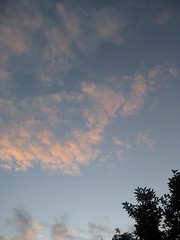 Item the first: "Mr. Tambourine Man" is so totally a Dreamquest of Unknown Kadath filk. I dare you to disprove it.

Now to write some book reviews.

2000 words of book reviews. And my existence justified for another day.

Also, that means that tomorrow, I can do whatever the heck I want, with the exception of getting the d-o-g to grandma's for the weekend. And trying to get some climbing in!

And then Thursday--I must be on my way, as the song says.

When I get back, I have a novel and a whole stinking lot of postcard stories to write.

And now, to bed.
Collapse