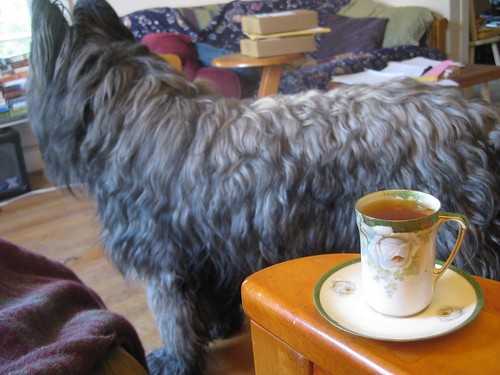 tea today: Stash holiday chai, which has almost as much nutmeg as Woodchuck Fall Cider.
teacup today: white roses, the final cup from

ctwriter's awesome teacup gift bag. I am looking forward to the new house, which has an actual built-in glass-front butler's cabinet in which one could, for example, store and display teacups!
dog today: badly in need of a grooming intervention

Today is a Rest Day, at least exercise-wise. There need to be some yoga later, but no running this morning. Running tomorrow, and possibly climbing or kayaking, though the rivers are all still pretty high and full of debris. There was just a "kayak at your own risk" warning on the radio re: The Mighty Connecticut. Which is, in all honesty, mighty enough: a pretty goddamned big and tricky river, with a nasty undertow. As I understand it, it's one of those deep U-shaped channels that result in sneaky currents detrimental to swimmers.

Only a thousand words on Shattered Pillars yesterday, because I got distracted by a bunch of distracting things--all of them quite positive. I've revised and expanded the two existing chapters, though, and started chapter three, though, and the POV that's new to this book. So that's kind of awesome.

And now I have to go to work, the first of which work is writing the cover copy for Book of Iron.

The Vampire Book Club is hosting a round-table of authors represented in La Datlow's Blood and Other Cravings, which happens to contain my story "Needles." And the roundtable itself contains my brief thoughts on why I am interested in vampires.

Also, they're giving away some copies. So go hang out.

Another four pages of Shattered Pillars today. I've decided that I need to adjust my goals, since it seems like what my brain can do right now without too much straining is a thousand words. So a thousand words it shall be, and I will try to accomplish that each day.

The book is getting written, and it will be a good book, and that is what matters, not my workaholic tendencies.

I have ideas for the rest of this scene, and the next few scenes... and I'm liking the words I'm writing... but actually getting them on paper, currently, is a slow and picky process.

I think I'm okay with that. I have four months to write this book; I can afford slow and steady and meticulous. As long as it's sufficiently steady to make up for the slow and meticulous part.

Honor your process, boys and girls. Even though it's bound to be different every book. Books do not get written by ignoring what works to get them writ in the service of what we think we should be doing.

And word of a nice sub rights sale today, which will (among other things) pay for the replacement laptop that's becoming less and less optional. I'll tell you more about it once contracts are signed.
Collapse