Today's major accomplishment: got all the book sale books tallied up, pulled, signed, and packaged for mailing.

I also packed all my remaining author copies. Despite the sale, and pulling some copies of stuff for a friend, there were still six large-ish boxen of author copies to pack, and I had five THCs and eight MMPBs left over.

That Mr. Silverberg had better look to his laurels!

...he has quite a head start on me, both in absolute and personal chronological terms. Really he doesn' have much to worry about unless I manage to stay productive for another sixty years or so.

In other news, I have such a crush on Greg Laden's brain.

That mating systems in apes are generally adaptations has not been seriously questioned by behavioral biologists for decades. The details, however, are still very much under investigation, and the study of mating systems in humans has been hampered by those pushing for human exceptionalism (of all sorts, including the "we are too cultural to have adaptations" arguments as well as the "god made us different" arguments which often come from totally opposite quarters) as well as by the "evolutionary psychologists" who have muddied the waters in human behavioral biology by being mostly mindless dicks.

via Bad Astronomy, a view from the Himalayas to the depths of the cosmos. Wish I'd had this shot when I was writing a particular scene in Range of Ghosts.

But that's okay. I'll find a use for it yet, never fear. 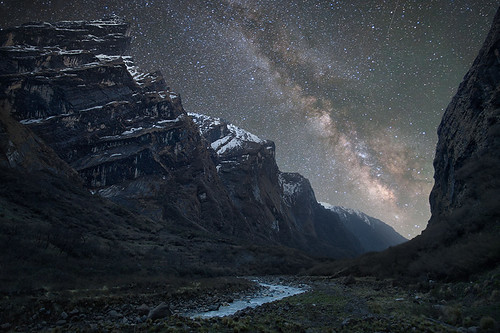