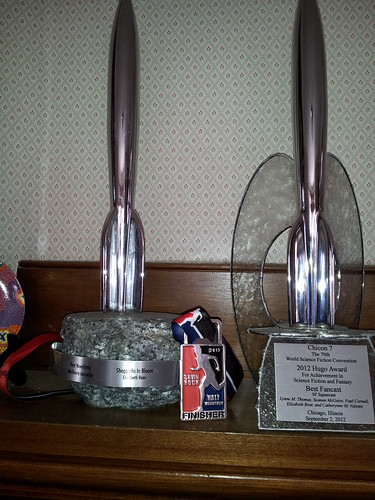 And here's Amanda in her race gear, looking very chic: 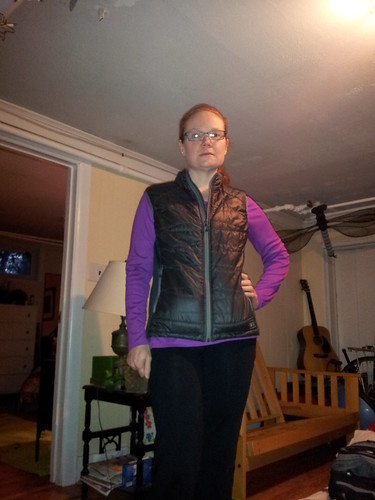 (Do you know how hard it is to find good workout gear that's not offensive to a Goth sensibility? Seriously, there's a killing to be made in this area.... except it's possible that there are only three jock Goths nerds on earth, and we all hang out together.)

The following morning, I am still walking like John Wayne, and I have eaten my weight in carbs and protein. But apparently my body is hardening off to this endurance running thing: it wasn't that bad, though I think it was more like seven miles of rolling hills in the middle, not five, and two of them were pretty brutal: one was steep and high; one was long and relentless. I managed to run the whole thing, though, which was my goal--and I finished in under 2:30, which was my stretch goal.

At the beginning of the race, I was being passed on all sides by everybody, but once we settled in I started to pick some people off, especially on hills. (Let's hear it for doing the damned hill runs every other week even though they suck!) About four people passed me; one of them somebody I had passed in Mile 2 who made a stunning comeback and kicked my ass.

When you cross the finish line, they hand you a bottle of water. After you drink the water, you notice they also handed you a medal.

I don't know if I will do it again. It was an interesting experiment, and I love being fit enough to do stuff like that. I might--it wasn't as bad or as hard as I expected it to be (let's hear it for long careful training and a good taper). And it's kind of pleasantly luxurious to have small children handing you Gatorade and Gu while you run. I'm not sure I won't do it again... but the training schedule is really stressful for me (one more goddamn obligation with a goddamned deadline that requires constant tending and attention, which is pretty much my entire working life) and since I'm not even remotely competitive even in my age group, I'm not sure what I get from running a race that I don't get from running around town.

On the other hand, I am officially declaring Project: Valkyrie complete and moving into maintenance phase. Project: Less of Me still has a bit to go, but I'm in no real hurry.

I'm planning on trying the Austin Run For Your Lives! in December, if my knees hold out. That should be fun, and I can do it with

stillsostrange and I ate bananas and chocolate, drove home, checked our results, ate sammiches, and then drove into Boston for Richard Thompson, Emmylou Harris, and Rodney Crowell. I could have used a larger proportion of Richard Thompson (nobody should have to follow Richard Thompson), and I was tired and hungry and not my best self by the end of the concert (translation: the largest land arthropod is ME. Crab crab crab.) but it was in general really good and I am glad we went.

I especially liked the bluesed-up version of "Can't Win" and somewhat countrified "Tear-Stained Letter) RT did (most of his set was stuff off the new album) and Emmylou and Crowell doing "Poncho and Lefty," "Tragedy," and "Black Caffeine." RT came back out and joined them for a massive jam on "I Ain't Living Long Like This."

Now I need to eat some more protein, and thing about climbing in a bit.
Collapse