Well, absolutely no writing has gotten done since I handed the welves off to the truepenny. And I am, quite frankly, okay with that. I've been catching up on reading and playing Portal and watching Miss Fisher's Murder Mysteries on Netflix. (Spoiler, I love it.)

Also, finally got around to replacing my dead desktop, two and a half years later. Let's hear it for pre-holiday sales. So there was two days of computer setting up. Because that's how these things go. And that necessitated rearranging the office a little.

Leonard Cohen's Popular Problems is looking to be the theme album for The Stone in the Skull. Or at the very least, for the Gage. 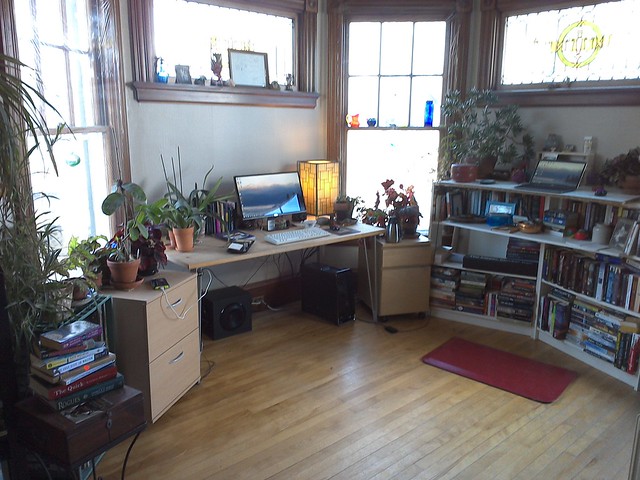 Here's what my corner of the office looks like now. 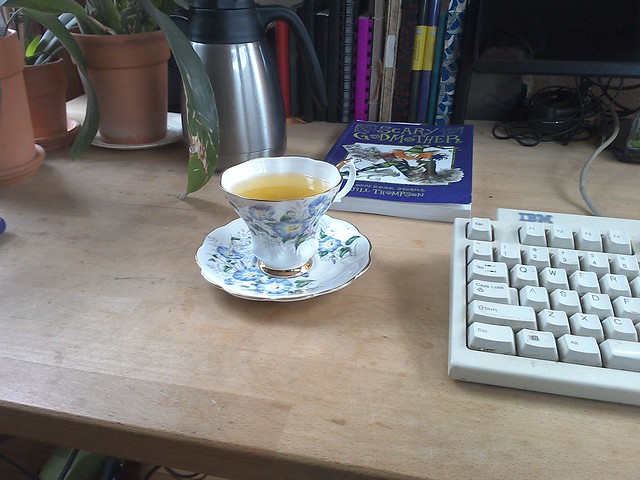 And here's today's teacup, which is a Royal Albert morning glory cup from the "Friendship" series that I found on eBay. (My favorite flowers: morning glories, iris, lilacs, crocus.)

Bonus: Saturday's teacup, which is a Queen Anne decorated with violets that I inherited from a family friend. It's full of Upton's Assam-based Irish Breakfast with milk and sugar. 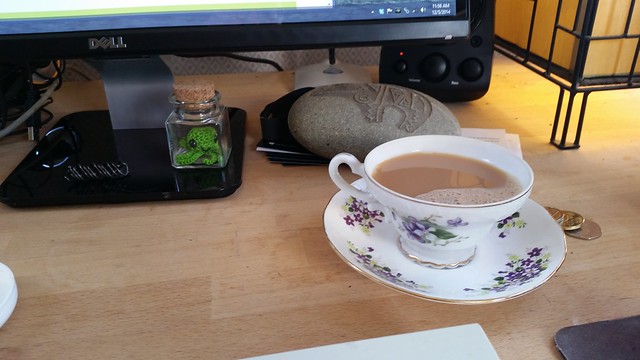 I do need to start fighting back from the post-novel ennui and whatever mild crud I've been fighting off. I apparently have some OCR issues to fix in the ebook version of Whiskey and Water, and I have some kickstarter stuff for Worldspinners due in January, and there's Tiptree reading to get done. And I have all this email to answer. And a secret santa gift to make, and some holiday baking to do. And trying to reconnect with friends after a year of hard travel and long absences, and the attendant loss of fitness and extra weight I'm carrying. And I need to get serious about my training for the half marathon in February, in related news.

I'm just so damned stupid tired. I've been turning down and bowing out of projects left and right, and I'm still booked up for 2015 already. Which is a good problem to have, but also, wow. Tired.

There is so much constant damn maintenance in this life.