Words to live by, that. It's amazing how much one can actually accomplish by applying that as a metaphor for life.

So yesterday I did not blog my progress, for various reasons that mostly amount to absolutely everything taking longer than it needed to. But I got about three pages on the replacement story, and my plan for today is to get even more.

I also did a bunch of research on north African dinosaurs. Which led inevitably, and with a kind of terrible logic, to watching Jurassic Park III so I could make fun of it on twitter. (I also watched Agent Carter and surprised myself by quite liking the first half, which was stylish and had great dialogue. I only half-engaged with the second half, though--somehow it lost tension for me, which may have had more to do with losing the plot when I went to forage for cheese and crackers than any failing of the show.)

I seem to have a mild bug, so I have an excuse to curl up with the dog and not do much else but write. And convert some leftovers into pot pie for dinner.

I did have an interesting conversation with

fadethecat earlier this week regarding writing plot, which I wanted to write down for posterity.

I was arguing that plot is the easy part, because plot is a machine. (Okay, #NotAllPlots, but three act structure is pretty much a thing where you can put a quarter in the slot and get a plot out the end, once you know how to turn the cranks.)

Basically, the most common forms of working with plot are a science. The hard part is the parts of story that are arts--character development, theme, emotional resonance--the things that work in more mysterious ways. The things that are emergent properties of other things, basically.

But plot, and to an extent language--in the sense of rhetoric--are pretty well defined and well discussed in various places. One still must practice, of course, but there's not a lot of mystery in how they work.

The tricky bit is that some of us come in with a set of skills in one of the more mysterious aspects--so characterization, say, is easy for us. But at some point, we're probably going to have to up our game on that front too. And because it's been instinctive up to that point, we have a hell of a time learning how to learn. 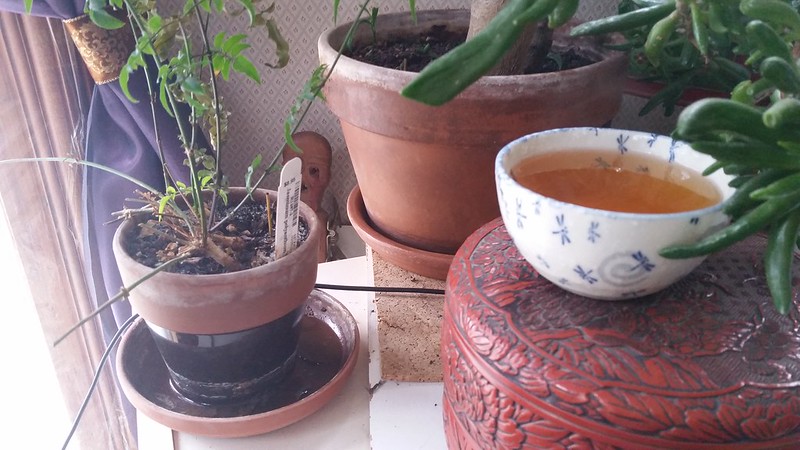 1400 words today on "The Bone War." Which gets me to the primary conflict, and I should have another day or two of writing to finish a draft, if everything goes as planned. Then I can go back to the interrupted "And the Balance in Blood," which still needs a climax. Now that I'm not trying to cram it into a too-small space, I can even go back and put some more conflict at the beginning.

In other news, I'm engaged in making ghost chili vodka, which is largely the fault of

ursulav and her spouse, and their habanero vodka. Right now, it looks like this: 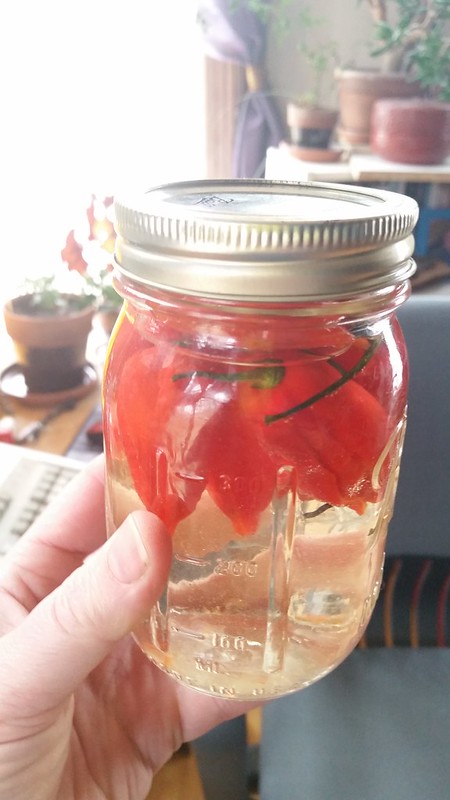 And here's today's tea, which is Upton's Yamato sencha, in today's teacup, which is the Frankencup. (The cup and saucer don't actually match, but they're learning to cohabitate pretty well.) 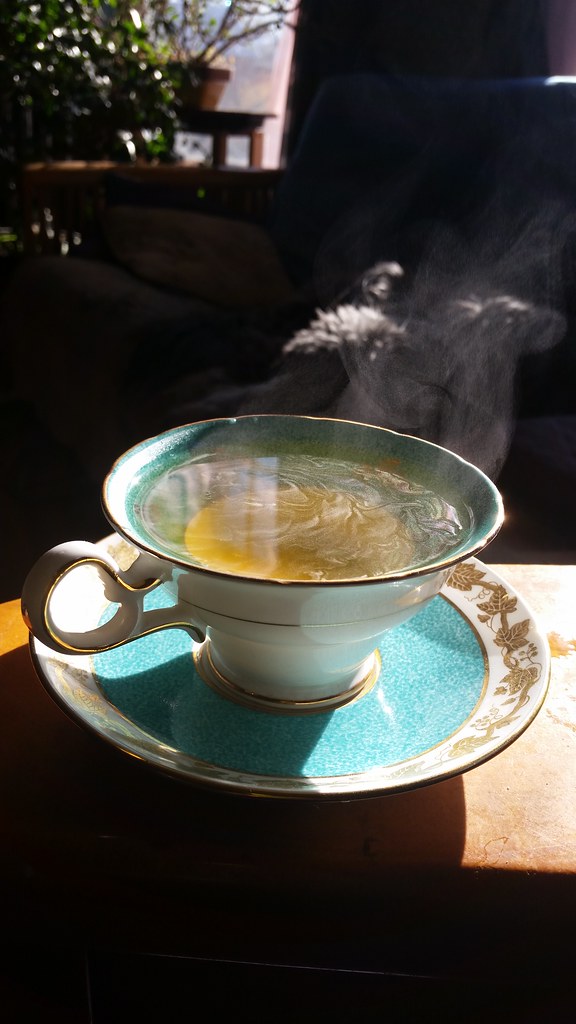