I'm in this week's Mind Meld over at SF Signal, talking about gaming influence on fiction and verse vica.

Karen's getting piles of fabulous reviews. You can check out the ones I've found over here at my Pinterest brag page.

Also, a Big Idea over here, and a guest blog at Charlie's Diary over here.

Here's my Goodreads article on some of my favorite Steampunk works. Here's a guest blog at D. Franklin's place on Strong Female Characters. Here's one at Aidan Moher's place on prostitute stereotypes. Here's an interview at Suvudu. Here I am interviewed by Fran Wilde at SF Signal.

...I forgot something, I know.

In the mean time, check out this gorgeous banner art by the inimitable Dan Zollinger for my Gotham Jazz world for the Storium roleplaying engine (still in gamma, but coming RSN!). (Click image to ennoirify at a higher pixel density!)

And then, have a nice cup of tea. 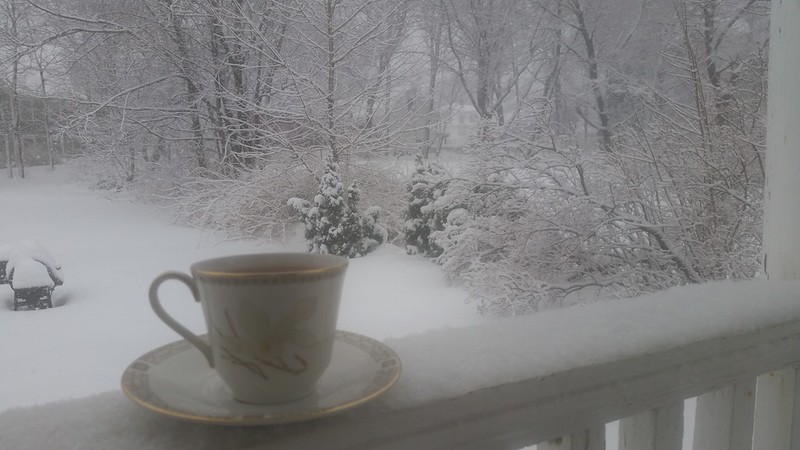 (I'm still drinking out of the White Nile cup, because it has an appealingly wintry color scheme that matches the  light and heavy snow outside, and what's in it is a second steeping of the Stash Portland blend.)

Now I have blogged dutifully, and I must

First, --30--. I just finished the rough draft of the robot termite story. Which means tomorrow I work on the sargasso lighthouse story, and also that I can start on the final revisions for An Apprentice to Elves, which

truepenny just sent over to me with her changes. After lunch. And shoveling. We have always lived in the shoveling.

I've been thinking a lot about stereotypes and representation lately, what with Black History Month, and with seeing the banner art for Gotham Jazz, and Karen Memory entering the world, and various discussions going on elseinternets. And I've been thinking about representation of historically marginalized groups, and how they--we--tend to continue to be shuffled to the side of stories. Not just cast in supporting roles, but cast in the same, passive, extremely limited supporting roles.

Some of it is, I suspect, because we are presented in media with a world that is extremely whitewashed, masculinized, de-queered. People who are not white able-bodied kink-free hetero cismales exist in a marked state in Western media. We're liminal, and in media where we start to approach anything like the saturation we have in the real world, it looks like we're taking over.

You get this in professional groups, too. Many people start feeling as if a space is feminized when it reaches, oh, 30% female. That's less than one in three, just to reinforce the point.

I hear a lot of my colleagues saying that they write stories in settings that don't have roles for women, people of color, queer people. This, of course, ignores the fact that we liminal folks have been existing in non-liminal spaces since people started to choose up sides and wear armbands based on race, creed, color, gender identity, and sexual identity. We've been erased from those narratives, largely, or at best footnoted.

But if you tell me that you can't write a World War II spy thriller with gay characters, or women, or people of color--I'm going to have to assume that your research is pretty surfacy in order to have missed Alan Turing and Noor Inayat Khan. If you're going to tell me you can't have a black gunfighter in the American old West, I'm going to wonder why you haven't heard of Bass Reeves.

The thing is, people who are not the default, who exist in that marked liminal state, deserve to have stories told about us. We deserve to have stories told about us which are not strictly about the ways in which we are not the default, too! (Old joke about the Gay Agenda, which involves Bowling Night and PTA Potluck.) Which is not to say that such fiction can't acknowledge the challenges of the marginalized, but our challenges are not our lives.

And I've certainly learned that with a little creativity, with a little stepping outside the stereotype and the default, history and the real world--not to mention completely made-up fantasy realms!--are full of unexpected places for historically liminal characters to make very fine protagonists. Like, oh, medieval women--as in the work of Sara Douglass--or enslaved Americans, as in Solomon Northup's Twelve Years A Slave.

Which isn't even fiction.

This has the added benefit of telling stories that are a little less played out, incidentally.