fire still burning, in a while she'll make it rain

Last night after sunset, I took the dog out in the yard for his last out, and--as is his wont--he went running around behind the shed to the darkest corner of the yard. There was rustling, as there often is, and then... no dog. For the entire duration of the apple I was eating as a bedtime snack.

I went to look.

The invisible dark gray dog was standing in the invisible indigo evening, and I could only see him when he moved. I called him again, and he didn't come. But I could see something pale in the darkness at his feet, and thinking it was his soccer ball, I reached out and touched it.

...and got a handful of an opossum's scaly chilly tail.

It stayed there until I managed to get the (reluctant) dog into the house and the camera out. 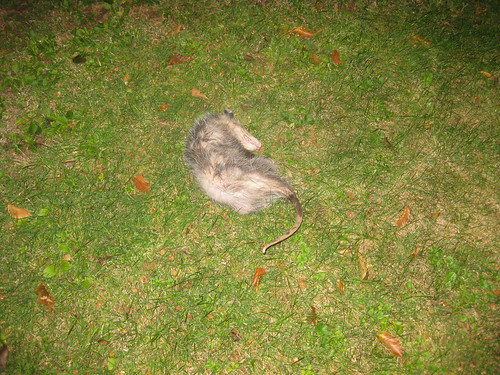 It was method acting convincingly enough that I was not at first sure if the dog had actually killed it, especially as it was a bit... er... damp. And the dog was definitely at a complete loss what to do about it, other than stand there and puzzle. I'm just glad he didn't decide it was a stuffie and bring it inside.

But there was no blood on the dog, and the 'possum had vacated this morning, so all's well that ends well.

Except for my 1d6 points of SAN.

Tags: no shit there i was, war stories
Subscribe