the next voice you hear will be your own

Tomorrow is Book Day! I'm afraid this means that there is going to be some spam between now and then. All about this: 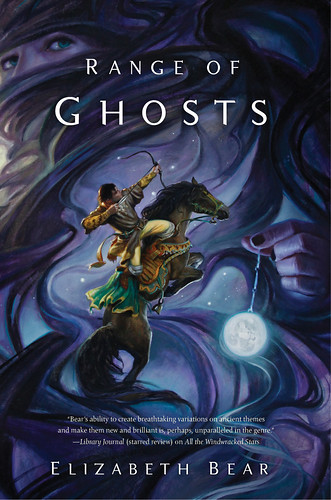 Here's an essay at Black Gate, about how I always wanted to write an epic fantasy--and now I have!

"I wanted to write a book that had the sense of scope and sense of wonder of the books I loved as a young adult… but I kept running into the same problem.

There’s so much epic fantasy out there. And so much of it looks strangely similar. Not identical, of course… but like different chefs’ versions of the same recipe. The ingredients are all the same."

And here's a little writeup at Romantic Times: Five things you need to know about Range of Ghosts.

I know cave lions, sabertooth cats, mammoths, and indricotheres have fallen out of favor in modern fantasy—but I've never really understood why. Sure, sure, most of the biggest Northern megafauna didn't survive the end of the last ice age—but this is fantasy!

And since it's fantasy, I can offer you...really, really big things. Giant mammals from the distant past! Enormous birds out of the Arabian Nights! And... the occasional marmot! Which, okay, is not as exciting. But they do have a lot of them in Central Asia."

You can obtain Range of Ghosts at many fine bookstores, or order it online here: