down at the mardi gras

Home from the first kayaking expotition of the year. We did seven-odd miles in about four hours*, there and back again with a lot of poking around, and my hands are letting me know that I do not have those particular calluses any more. As soon as this post is up, I will be taking a shower and a Flexeril, not necessarily in that order.

It was a great trip. We did the Mighty Quaboag there and back again between 148 and West Brookfield, a really nice trip on a lazy river, beautiful cool sunny day. Despite SPF 85 and a cap, I picked up some streaks of sunburn. It is the curse of the melanin-deficient.

The Jeff saw a snapping turtle (I missed him) and we both saw a bunch of little turtles. (Or "tortles," as they are usually dubbed while paddling.) We also saw a blue heron. 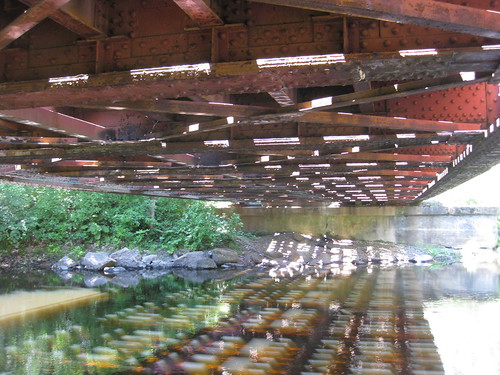 This is the underside of a railroad bridge. Pretty, isn't it? You get such a nice look at our nation's crumbling infrastructure from a kayak. There's a bridge I drive over every day that I really wish I had never paddled under, let me tell you.

This guy paid a visit to my kayak, and so did this guy, prompting many jokes about dragonflies abducting damselflies. And something horseflylike took a big damned chunk out of my calf.

We also saw many beaver lodges, all sorts of birds (many very nice looks at redwing blackbirds and some sort of gray-backed, white-breasted, moderately fork-tailed swallowy bird with an orange-buff throat, and a catbird who gave us quite a serenade--also an albino pigeon), but the real highlights were a juvenile Northern water snake (under that same railroad bridge): 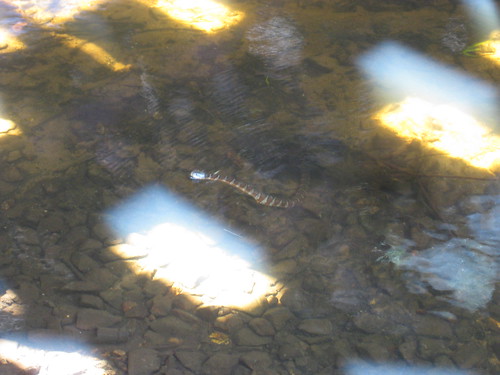 And the beaver who stopped in her busy schedule to give us the once-over: 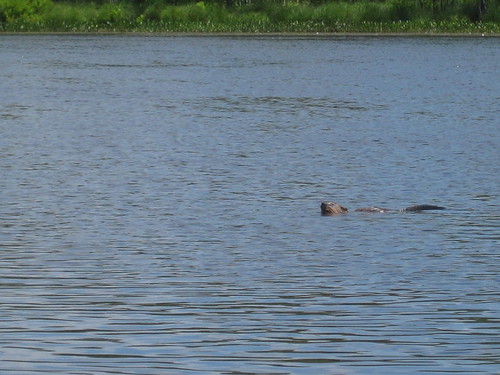 I am still kind of giddy about the beaver.


*It turns out my Cardiotrainer ap does kayaking. And it even puts an adorable little Universal International icon of a kayaker on your workout bar. So I know how far we went BY THE POWER OF GPS.
Tags: (new) england, bay state, me upon my pony in my boat, recumbent boating
Subscribe