mercy this and mercy that. let justice prevail.

I'm working on revisions for my short story for the Hieroglyph Project, and wishing I had a lot more time to work on it. I am full of partly-gestated ideas, and not sure how to make any of them crystallize. Especially since I'm having serious trouble focusing today. But I will put on my big girl pants and get 'er done. Because that's how we roll.

(Also, I just figured out a great scene for the end of Steles of the Sky. Which was finalized last week. Le Sigh. Maybe I can work it into a sequel, if Tor wants any more Eternal Sky books down the line.)

So I bring you photos of things, instead. And the Return of Tea, since I picked up a new mismatched but aesthetically pleasing cup and saucer at a barn sale this morning.

Here are some nifty wildflowers I noticed while walking the dog this morning, for example: 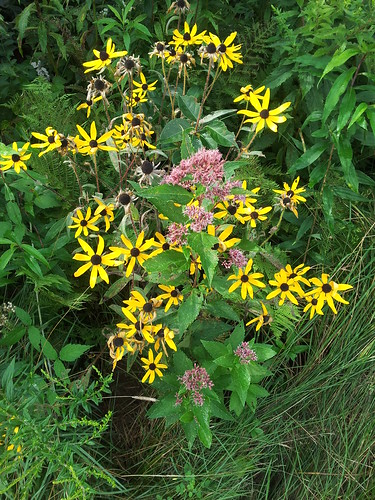 And here's that teacup and saucer. 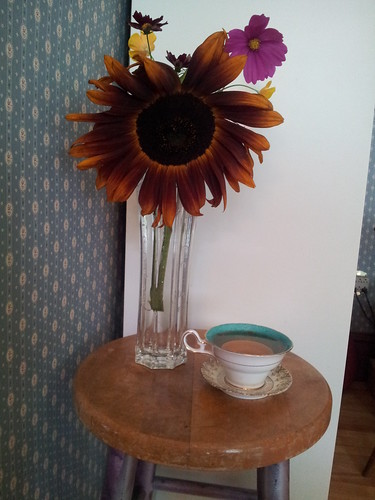 The teacup was manufactured by Westbrook, in England. The saucer is by the Richard Briggs Company in Boston, manufactured in France. The flowers are from the back yard, except that insane Van Gogh sunflower, which was grown by a friend.

The tea is Upton's Jiu Hua Mao Feng ("Nine Glorious Mountains"), a nice light China green tea which looks amber in the photo because it had been sitting in the thermos for a bit, and had oxidized some.

In Project Valkyrie news, a ten mile run yesterday over a new route, because I got a hot tip from another runner in town about a back road through the hills to the neighboring town. It was gorgeous, and I may try to repeat it tomorrow, because we get one more day of cool weather before August returns. Hills are mostly trivial for me now, and I made the mistake of mentioning it to this acquaintance...

...well, there's one hill on this route that I had to walk up the last half of. But it was desperately pretty, and I'm pretty well hooked on this whole being able to go out and run for two hours thing. It is such a great way to look at the world and reset my brain. 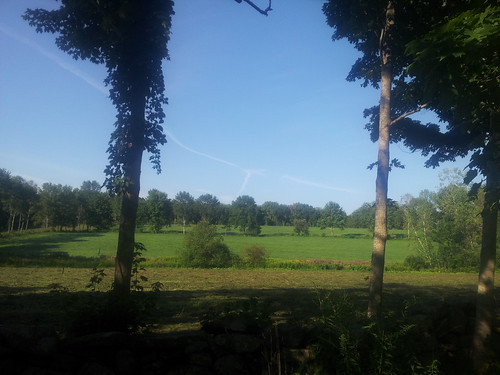 I'm currently operating under a relaxed version of The Discipline, in that I'm using a Fitbit (which I love with a passionate love: fitness Tamagotchi!) and trying to meet movement goals using that--and also use its calorie estimates to undercut my actual expenditure by about 500 calories a day. Which is not at all onerous, actually, given what I was doing previously.

My weight loss had stalled out with about twenty pounds to go, and my body was fighting like heck to regain about ten pounds--which it did; some of it muscle. As a result of that ten pounds, though, my running times have slowed down a bunch and climbing has gotten a lot harder again. I was doing 5.10s pretty handily for a while there, and they're back to being a struggle. Also, running in hot weather is a lot less miserable with less insulation, and in winter time I can put clothes on as needed.

(Slinky dresses are also a motivation, but you know, God in Her wisdom did give us foundation garments.)

So I'm working on finding a balance that will let me take this last bit of excess energy storage off, and if slow is what it takes, slow is perfectly doable for me.

What's hard is trusting in the process, and not fretting, and not trying to rush things. But since my body had pretty obviously decided that WE ARE IN PERIL CONSERVE RESOURCES and what I need it to do is STOKE THE FIRES!!!, this is what we're trying. My metabolism is an amazing beast; considering how much I exercise and how carefully I eat, that it manages to cling to the layer of insulation no matter what. *g*

Tags: get out in the park, project: less-of-me, project: valkyrie, tea, the discipline
Subscribe