it's hard to dance with the devil on your back

Working with windfall apples requires a particular kind of attention. At the risk of sounding like a Christopher Kimball essay, you never quite know what you're going to get from looking at the outside of the fruit. I mean, you can spot the rotten ones pretty easily--but then sometimes you can have one that looks completely miserable, but once you peel it and cut out a couple of bruises, it's all sound fruit. And then there's another one that looks rosy and perfect--not even a bruise--and even seems fine once you peel it, but as soon as you cut more than skin deep, you realize it's riddled with wormholes.

Anyway, as you've probably guessed, there's a hundred-something-year-old Macintosh tree on the property line between us and the neighbors, and its been dropping apples slightly smaller than tennis balls all over the back yard. I properly earned my thrifty Yankee card today, because after my morning run not only did I go out and clean up a bunch of apples, but I picked out the decent ones, took them inside, and turned them into an apple crisp that is now cooling on the kitchen counter.

I also pulled all the picked-over chicken carcases out of the deep freezer and boiled up a batch of stock, part of which will be chicken soup for dinner tonight and the rest of which will go back into the freezer in quart containers for future soup, gravy, and the like. 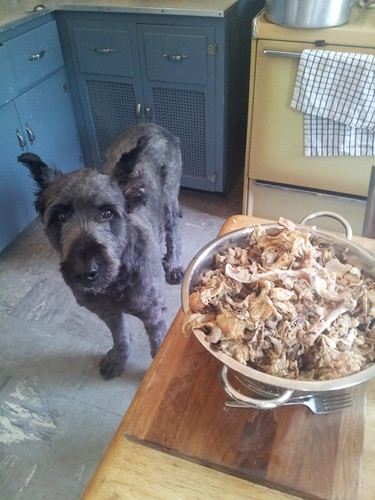 (Dogs think chicken soup day is the BEST DAY. Especially since he gets all the kind of squidgy bits when I pick the bones over.)

I feel like I earned my apple crisp tonight.

I've got a new running route--or actually, two new routes with a common root, as it were. A fellow runner tipped me off to a pedestrian-friendly back way to the neighboring town, which is not the terrifying corrida de toros the state highway entails for foot traffic. It's gorgeous! Tree lines lanes through farms and orchards, and on the way out the hill is gentle and easy. (On the way back, you do it all at once, so it's brutal--but then it's over with, and you have that long gentle hill to run back down for dessert.) So I can run out, loop around the neighboring town's common, run back, loop our common, and get 10K. Or I can run over, run around their lake, run back, and get 11 miles.

And it's pretty and I like it a lot. Ahem.

Anyway, when I got home, I happened to notice that the dill from our farm share had a hitchhiker: 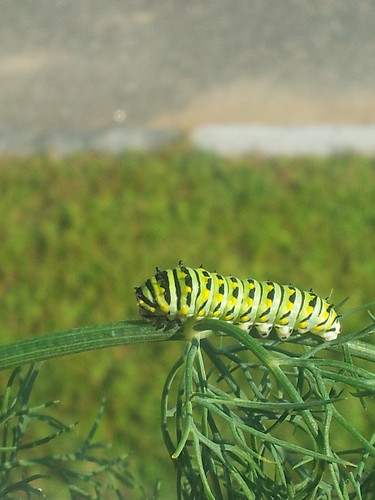 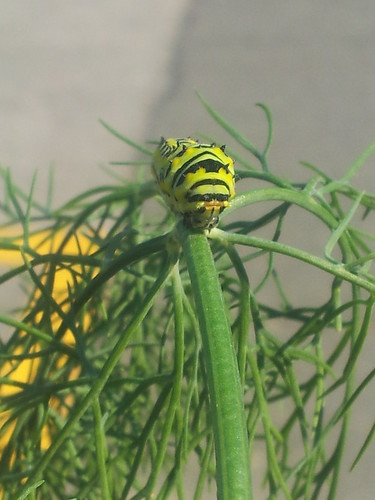 Isn't it lovely? It's a black swallowtail caterpillar (Papilio polyxenes) (my favorite local butterfly), and though you can't see the osmeterium in these photos, it poked it out at me when I harassed it to make sure it was alive.

Well, reader, I am kind of a sucker. Because it turns out that these caterpillars feed on plants in the carrot family (thus its home on the dill: they also like fennel, carrots, parsley, Queen Anne's lace, and such like).

None of which we currently have in the yard.

So I carted the little dude down to the local park and found it some Queen Anne's lace to hang out on: 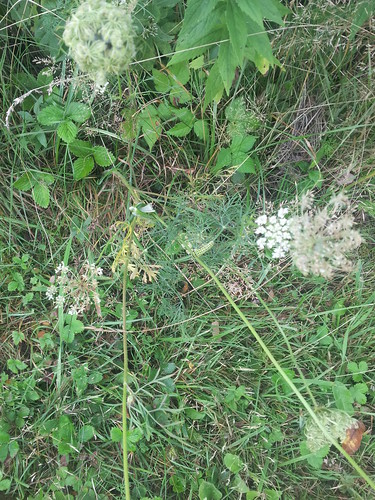 My good deed for the day.