We came here on a porpoise: ecotourism spectacular. The one with the gannet. A Connecticut Yankee in King Arthur's Court. And like that.

Yesterday was my friend Jack's annual birthday whale watch. This year it was a smaller group than in years previous: Jack, me, two other members of our Pathfinder group (Hi, Julia and Lou!), and the illustrious Batwrangler, who brought her camera.

But before we get to that--dear reader: Friday, I had An Adventure.

I took the dog for a run Friday morning, then piled myself and my baggage into the Moby Smurfberry and departed for parts north, where I planned to spend the afternoon and evening with writer buddies: Patricia Bray, Marko Kloos and his delightful spouse Robin, Ellis Bergstresser, and John Murphy: in an extravaganza of stuffing ourselves at King Arthur Flour and then consuming alcohol and bison burgers in massive quantities at Patricia's house. 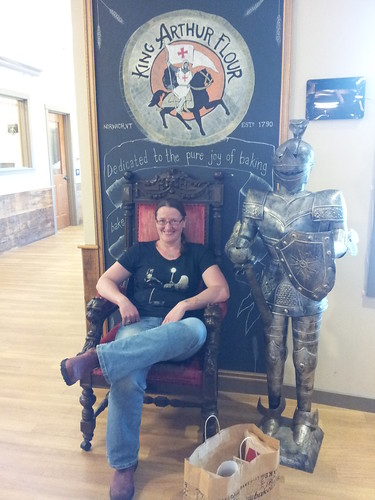 As you can see, I eventually made it to the appropriate places, but not without having to change a tire alongside I-91 northbound. And my little Honda, alas, only supports a donut as a spare. So I limped in with skinned knuckles, an hour late...

But it was worth it. We stuffed ourselves, and I bought some fancy flour and baking things, and then Patricia and I decided to walk lunch off along a glorious rail trail while everybody else went off to accomplish Various Errands.

The renovated King Arthur is kind of awesome. The Mothership. A Temple Of Food. Try the amaretti. 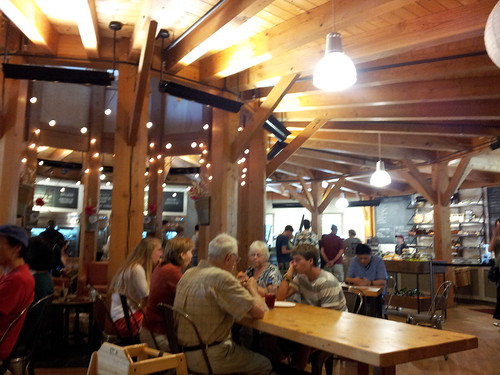 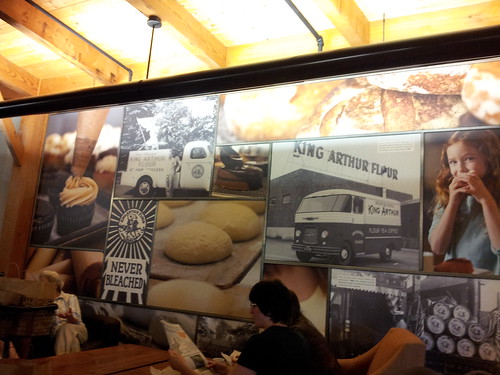 (Do notice the mounted knight in the bed of a pickup truck in that vintage ad up there. We do not know how to advertise these days.)

The walk was a success! And we fortunately did not have to portage. 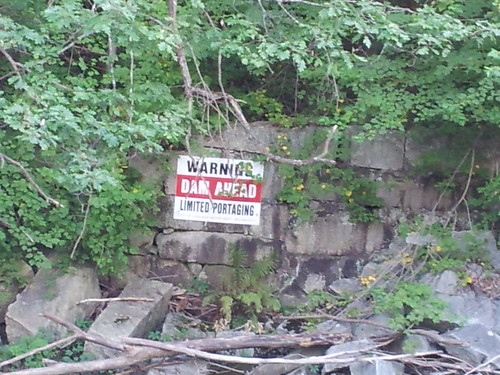 (As a kayaker, I can only imagine the chill that might enter one's heart rounding a curve in a brook to see that posted on the stones.)

We then ate and drank all the things, including King Arthur's house-made marshmallows, brownies from their mix, spiedes, burgers, salad, horse douvers, Ellis' home made peach jam... my god, it's full of stars.

As Patricia and I were going to bed, we found a baby tree frog or wood frog stuck to the molding inside her door and carried it outside. The next morning, we had another brisk walk (upon which we noticed a newt. Possibly somebody had been turned into one, and had not yet got better?) 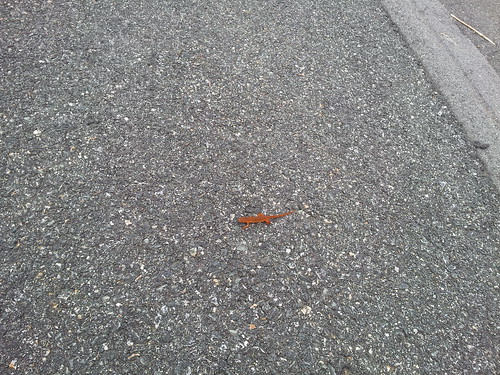 And then I limped on my donut over to Batwrangler's house, and with a stop to join Jack, we proceeded with all deliberate speed out to the coast.

There was lobster macaroni and cheese for lunch, from the Lobster Pound. 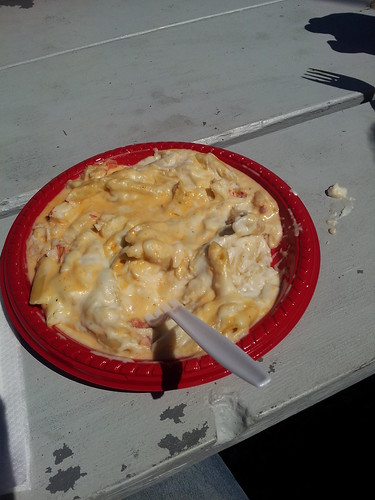 (That clicking sound you hear is my arteries.)

The boat we always go out on is the Atlantic Queen II, out of Rye, with naturalist support from the Blue Ocean Society. This is the same boat I took my dear Mr. Lynch out on earlier this summer for his inaugural whale watch, and after several years of customer loyalty we can all pretty much recite Brad the Captain's safety spiel by heart. (It never varies, not by so much as a word, and is reasonably well saturated in dry Yankee humor and common sense.)

The trip with Scott was a pretty special one, with good looks at two humpbacks feeding cooperatively...

This one was spectacular. We saw so many whales we didn't even make it out of sight of land.

The weather could not have been finer: cool and clear and bright, a little taste of early autumn in late August. We saw Atlantic white-sided dolphins, a minke whale, a fin whale (my favorite *g*), and harbor porpoises, which were a new one for me. There was also a gannet (it was a solid wall of Monty Python jokes this weekend, folks), an ocean sunfish, (here's another photo of the lumpy critter) and although I did not see it, a glimpse of a harbor seal.

Batwrangler had her cameras along, and managed some pretty nice shots. 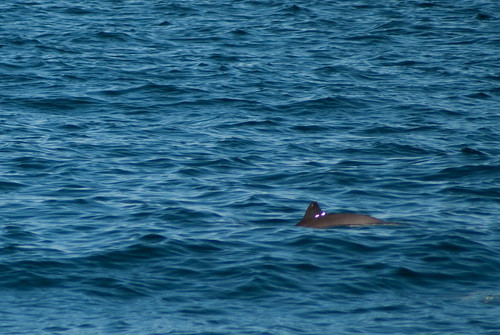 This is Scar, a well-known minke whale who hangs out around Jeffreys Ledge in the Gulf of Maine: 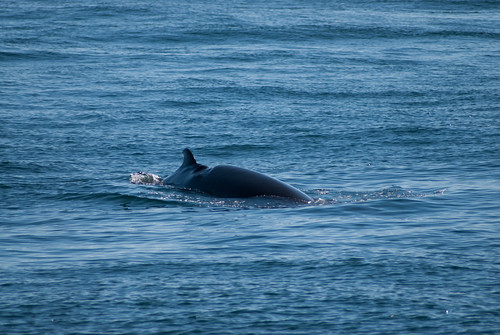 As you can see, Scar is a survivor of a violent encounter, probably with a boat. The whale's been sighted in its current healed condition since the 1990s, so it's over 20 years old and still trucking along. Here's a very clear photo from the Blue Ocean Society illustrating the damage this whale has survived.

The dolphins were male groups (lots of jokes about "bachelor pods") and at least one of them was in high spirits, moving fast and sporting in the waves, doing flips and so forth.

I happened to be standing next to the bridge, where I could overhear some radio chatter. The fin whale seemed to be interacting with the dolphins in some manner--whether they were cooperatively feeding, or whether the whale was working a patch of small things that were also feeding fish that the dolphins were hunting, or whether they were just hanging out was hard to say--but when the fin whale came up fifteen or twenty feet from a smaller whale watch boat nearby, I heard its captain say, "It just came up under my boat! That was way too close!")

It was much closer than in this shot: 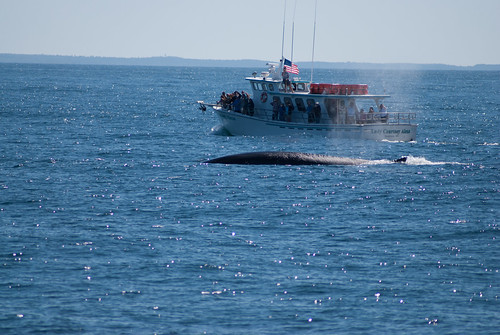 but that one gives you an idea of the relative scale of whale and boat. (!!)

Here's a whale and that gannet: 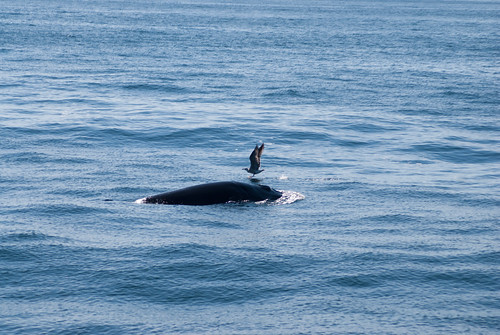 Here's a Bear on a Boat: 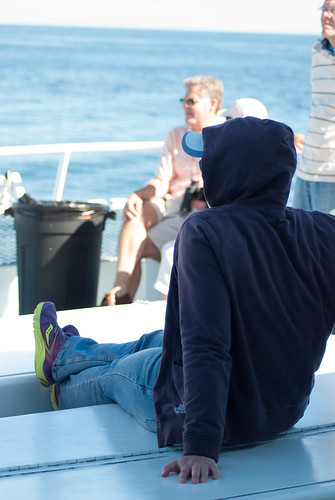 And here's one of the bachelor dolphins doing dolphin things: 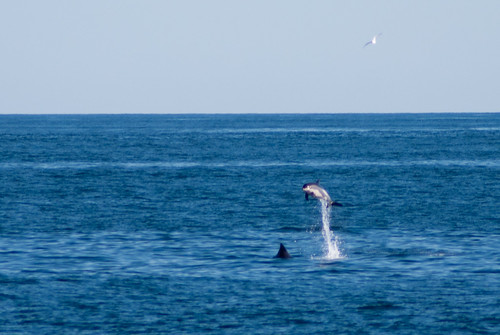 Why do dolphins do that? Because they can, I imagine.

And then I had this for dinner: 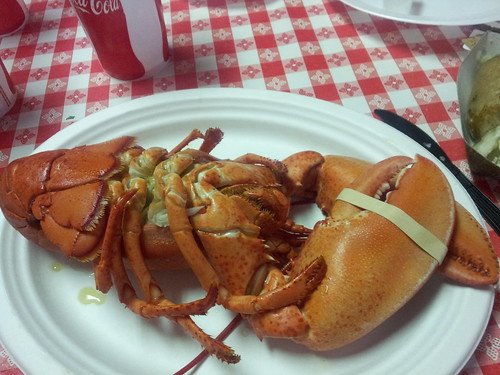 (We went to Newick's for dinner, as tradition dictates.)

Now, to take the dog for a run.

Edited to add: A really spectacular photos of the dolphins playing from the Blue Ocean blog, which now has a post up on yesterday's trip.
Tags: (new) england, moby smurfberry, new hampshire, peregrinations, signage: an occasional series, you can't get there from here
Subscribe