the bottle was dusty but the liquor was clean

Yeah, I have a problem. I'm working on a short story, but I have the Post-Novel Ennui, and my head has that empty dustbunnies-rolling-over-the-floor feeling I get when I have used up all my brain. So I have emailed the editor, and let him know that I am Out Of Clever, and the story may be a little late.

Fortunately, the editor in question is a good egg, and seems to understand.

This is happening more often, lately. I'm not sure if it's due to increasing demands, or due to me getting old. In any case, I'm trying hard to say "no" to more projects, even though that's stupidly hard.

But I need to make myself space to be creative.

Anyway, I took today off. I took the dog for a walk, and I'm catching up on recipe blogs. And I made myself a Delicious Cocktail. It's a Clover Club. I even made my own grenadine. And I walked over to the co-op to get pomegranate juice. (Our local co-op is a wonderland. It's the size of a large broom closet and has one of everything. It's also the only grocery store in town. I came home with pomegranate juice, habanero jelly, dark chocolate, and sticky brown rice. Seriously. Rural town of 3000 people.)

Here's a photo of my pretty pink drink: 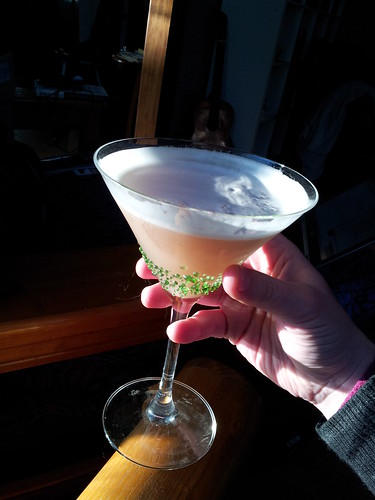 Earlier, I reported that Steles of the Sky had scored the coveted starred review from Kirkus. Well, it got one from Publishers Weekly, too. And much less spoilery! (There are spoilers for previous volumes in both reviews!)

I do indulge myself to quote:

Bear’s stellar conclusion to her Mongolian-flavored fantasy trilogy (after Range of Ghosts and Shattered Pillars) is a satisfying mix of traditional epic fantasy elements, flavored with original magic and grounded with mundane details that make the fantastic seem entirely possible. As the skies shift, reflecting the mortals in power and their associated gods, forces align to support or challenge wizard al-Sepehr as he wages war in the name of the Scholar-God. Warrior Re Temur and his allies travel to Dragon Lake to rally the opposition with Temur’s declaration of his assumption of the position of Khagan, heir to his grandfather’s empire. Battles are fought on both a personal level and a grand scale, with artifacts of obscure ancient civilizations, spirit animals, magical creatures, and poetry and politics. The conclusion is both untelegraphed and completely appropriate. Bear’s trilogy makes a rich contribution to epic fantasy’s expanding borders of emotion and invention.

And we didn't quite get the starred review trifecta, alas... but Booklist really, really liked it:

Bear concludes the epic begun in Range of Ghosts with her usual subversive flair. Temur and his companions begin this volume in the city of Reason, exploring ancient places and magics; they must make their way to Dragon Lake to declare Temur Khagan and gather an army against the terrible forces of Al-Sepehr. Edene, having effected her own rescue, contends with the terrible sun of Erem and the voice of the Green Ring. Al-Sepehr plans to use Saadet’s son, Quori Buqa’s son, to contest Temur’s claim on the Eternal Sky. There are, of course, other threads to be woven together: those who would fight at Temur’s side, and those who have taken the side of Al-Sepehr. Everything leads to a great and terrible battle at Dragon Lake, at which the very fate of the world may well be decided. The world of the Eternal Sky is a gorgeously fleshed-out one, and the characters without exception fascinating, sometimes maddening, and complex. This is a pleasing conclusion to an epic; it ties up the major threads but leaves many open questions about how the world will move forward. — Regina Schroeder