if you gotta play at garden parties i wish you a lotta luck.

I bring you publications and stuff! 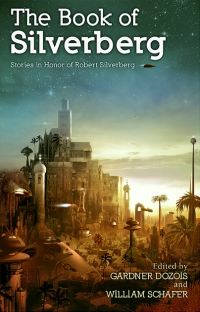 THE BOOK OF SILVERBERG! Edited by Gardner Dozois and William Schaffer. Out next week. and full of stories and essays inspired by the work of Robert Silverberg. Including one by me!

Publishers Weekly liked it a lot, and gave it a review which included the following: "Standouts include Mike Resnick’s “Bad News from the Vatican,” which follows up on the idea of a robot pope, and Elizabeth Bear’s “The Hand Is Quicker” which explores the nature of addiction and perception in a society obsessed with virtual reality."

Lois Tilton at Locus reviewed it positively and says of my story, "...cynical move worthy of the master at his most depressing." (I have just been compared to Robert Silverberg and not found wanting. This is a career highlight.)

And Library Journal says, “Standouts include Connie Willis’s adorably weird ‘Silverberg, Satan, and Me or Where I Got the Idea for My Silverberg Story for this Anthology’ and Elizabeth Bear’s bleak future of false facades ‘The Hand is Quicker.’ …These stories will resonate most with readers familiar with Silverberg’s work, often being playful riffs on his famous stories or novels, but the tales can be enjoyed on their own merits as well.” [full review not available online]

This includes my story "Madame Damnable's Sewing Circle," the seed that eventually grew into Karen Memory (out from Tor next year). So if you'd like a little foretaste of that--and tastes of the Weird West from all these other wonderful writers--here's a great opportunity to get in on the ground floor.

Publishers' Weekly is equally complimentary of this one, and calls my contribution "impeccably crafted." They've also got me gagging to read the Lansdale, Liu, and Williams contributions.