stillsostrange on Sunday, and also to do Writer Things and confab with her and several other colleagues about Writer Stuff. Many plots were discussed.

On the way down, I caught this amazing triple rainbow over Chicago: 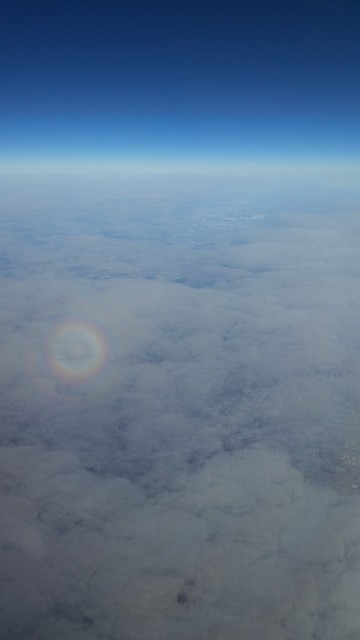 This is what the sky over Galveston looked like at sunset on January 31st: 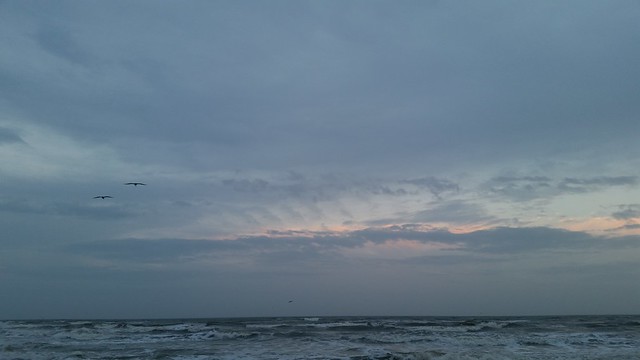 The day of the race was supposed to be rainy, but instead it was mostly quite sunny, and around 70 degrees. Which is a little on the hot side when you are running 13 miles.

These are our before faces: 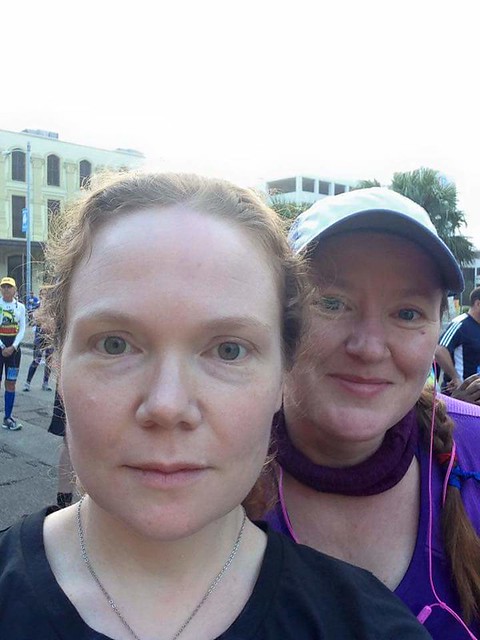 And this is the view of the beach along the race course: 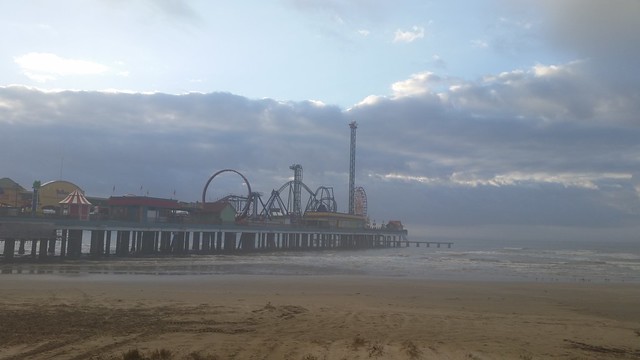 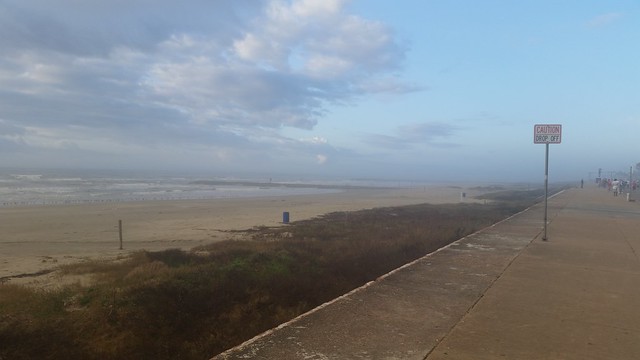 Doesn't look quite real, does it? The water and sky were the most amazing hazy agate colors. Absolutely breathtaking in a subtle sort of way. We ran through several old Victorian neighborhoods too, and the houses were lovely. A half-marathon is a great way to tourist!

And these are our "after" faces: 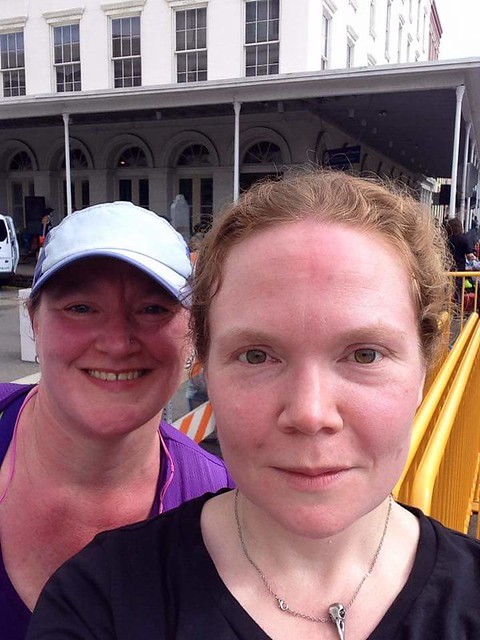 Yeah, it got hot. We were delighted to find a kind guy handing out handfuls of ice to runners at the 11 mile mark. We filled up our hats, and it was a serious relief.

Then I came home to this: 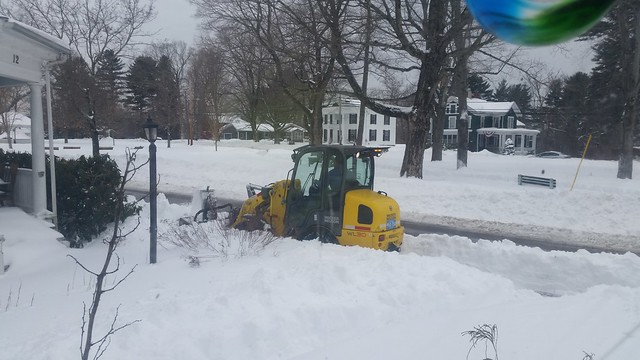 Here's some tea! Before I left, I was drinking from the Royal Albert morning glories: 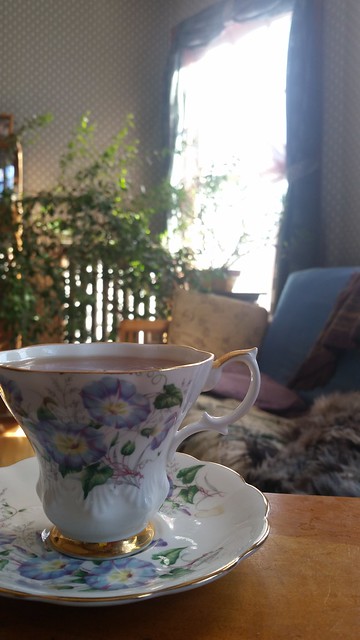 And the tea on Thursday was Constant Comment. Because I like it, and I'm not too much of a tea snob to say so.

Today, I lifted--I'm starting a new powerlifting program, and I'm getting serious about the self-discipline, because honestly that half marathon was a LOT harder than such a flat course needed to be, and all my clothes seem to have shrunk--and grocery shopped, and cleaned the kitchen, and made dinner for the house. And then I wrote a bunch of words on the micro robot story, which still has no title but which I think I will finish tomorrow.

Today's first pot of tea was Stash's Portland blend, and the second pot was Stash's Wedding Tea. I have a new teacup! It's a Royal Doulton pattern called White Nile, and though it's not eggshell-amazing translucent like my other Royal Doulton cup, it's very understated and pretty. 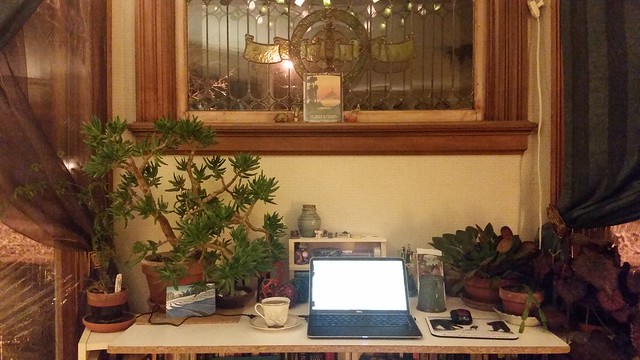 Now I'm going to practice some guitar and read for a while before bed.

But before I go--for your delectation, a selection of Galveston signage! Texas never disappoints. 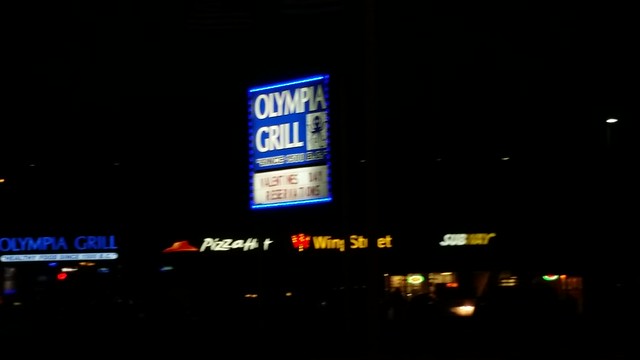 Cthulhu runs a restaurant. Sorry it's blurry, but there's an octopus with an Illuminati eye on that sign, and the text below OLYMPIA GRILL reads, "Since 1500 B.C."

Then there was this one: 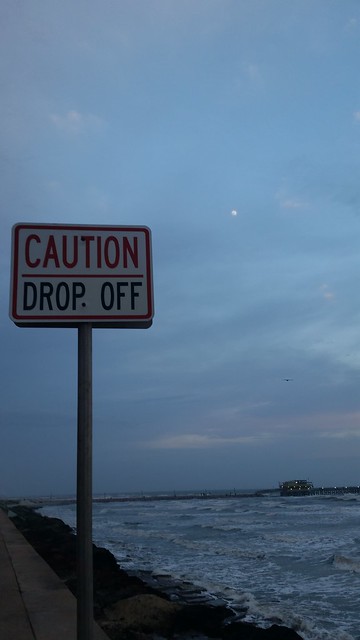