russian roulette is not the same without a gun

There have, in fact, been fandom wars fought over the definition of what, exactly, science fiction is. That second "F" in Science Fiction and Fantasy Writers of America was only added in much later years. (1992, per Ellen Klages and Michael Capobianco. Thanks both!) It is still unpronounced, and doesn't appear except as a drop shadow in the organization's acronym. (This despite the fact that the early pulps published both indiscriminately, and a number of our forebears wrote both indiscriminately. And I tend to see them as a spectrum, frankly.) But at this point, attempting to exclude fantasy writers from SFWA is a battle only being fought by a last few Hiroo Onodas on their tiny islands, while the world largely carries on unconcerned.

Fandom is a very big tent, too. Large enough for a nearly unlimited number of people. Prodom, too, has room for nearly* everybody. It's a big tent, and here's the thing: it's like the opposite of a TARDIS: it's not so much bigger on the inside as capable of infinite expansion.

Prodom is also not a single thing. It's everything from the folks peddling their ideas in Hollywood, to the ones self-pubbing their first successful book on Amazon.

The Venn diagram between pro and fan is also largely overlapping, by the way. "Pro" is a smaller purple circle inside the big blue circle we name "fan." There may be a sliver sticking out that's red, but then again, that might be an optical illusion. 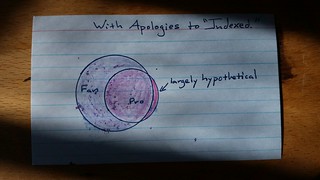 Both also need to make room for and include people of every demographic that are interested in being pros and fans.

Which, it turns out, isn't that hard. (I myself consider a number of writers who hold very different political views than myself friends, literary idols, and/or role models. I'm thinking of writers such as Steven Brust, Nora Jemisin, John Barnes, Tim Powers, Robert Silverberg**. I don't agree with all of their ideas, but man, I respect and admire every one of 'em. (Steve is my oldest friend in genre, somebody I love very dearly indeed, and you should see the two of us go at it.)

Hell, I don't always agree with my boyfriend on politics.

That is, as long as we all play fair. And fight fair, for that matter. There's healthy communication and there's abusive communication, and I think it's good that we've started drawing some strong lines between the two. We need to draw more*.

The point is, we make our own market by reaching readers and not sucking. Those readers make more readers. Many readers support a robust and somewhat tumultuous discourse. This is how it works.

Rather than fighting over scraps, we need to be reaching out for the banquet.

It may sometimes be uncomfortable, because a diverse group is more challenging in discourse than a homogeneous one, but that's not bad.


*Not having an Office of Asshole Removal, as previously mentioned, we can't actually get rid of some of the worst offenders. But we do have a social practice to rely on--a pretty effective one, known as "shunning." We sure as hell don't have to offer them aid and comfort, or take their advice. Let 'em set up their soapboxes in the park, as

grrm wisely says, and preach it to the wind.

**The astute will notice that there is more than one end of the political spectrum represented here.
Tags: industry, remember black genesis
Subscribe
Comments for this post were disabled by the author