It's Patrons only, but the rough draft of the first scene of Rook and Ruin is up at my Patreon here.

You guys, I'm so excited about this story.

Well, that's sort of a draft, ish, of Rook and Ruin.

If it keeps that title. Who knows?

32,000 words, and the denouement is a bunch of pieces on the floor, two of the characters need to grow a real relationship, and there's one scene left to write, but it's done enough for now.

Now I'm going to take a shower and put my pjs on.

Sometime between 6:45 and 7:20 am, I start to make moaning noises and twitch under the covers, as sunlight intrudes on the bedroom and I start to assume consciousness.

At this time, Gurney realizes that I am awake, and jumps up onto my shoulder or chest for cuddles. His brother Duncan soon follows, and eventually Molly turns up as well.

Today, when I rolled over, Duncan was on the foot of the bed, but the only kitten who wasn't too musy doing Important Kitten Things to come be petted was... the semiferal, Molly, who we have been working on for two months now to get her to accept being touched.

She settled cheerfully into the warm spot between Scott and me and started purring like a mad thing, poking my fingers with her paws, headbutting, and generally demanding to be cuddled and fussed over.

She was getting a bit pushier about getting her share of time and petting when the boys were climbing all over me, but this is the first time I've really been independently Molly-cuddled.

The boys showed up eventually, and then I had to spend about twenty minutes playing fetch with them (the boys play fetch, but only with specific toys. Duncan likes the plastic springs. Gurney has a particular sisal mousie that is HIS. It is the Best Mousie. Other mousies are mere shadows of the One True Mousie.)

Photo evidence of the amount of kitten fetch my life contains now: 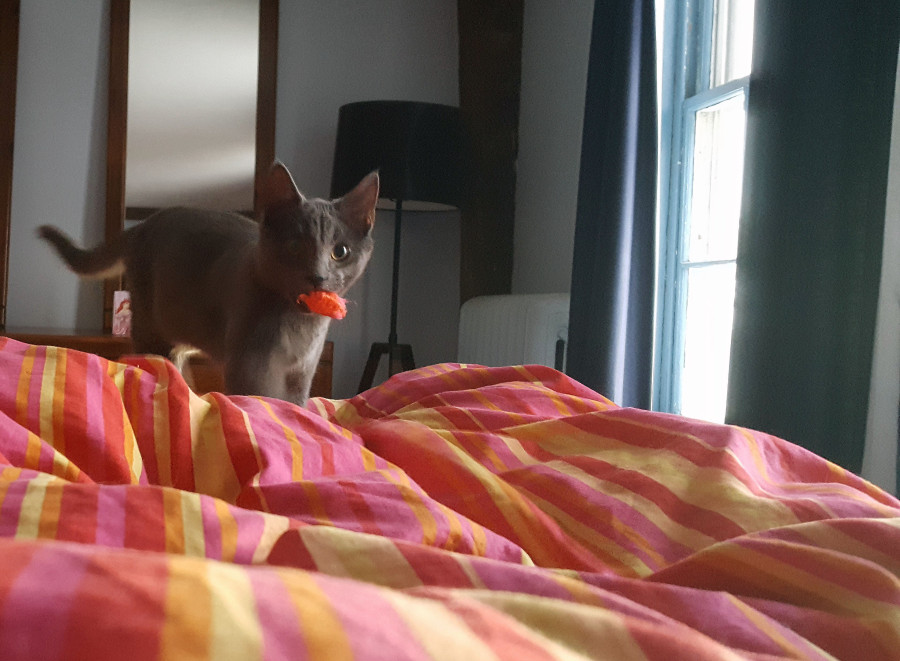 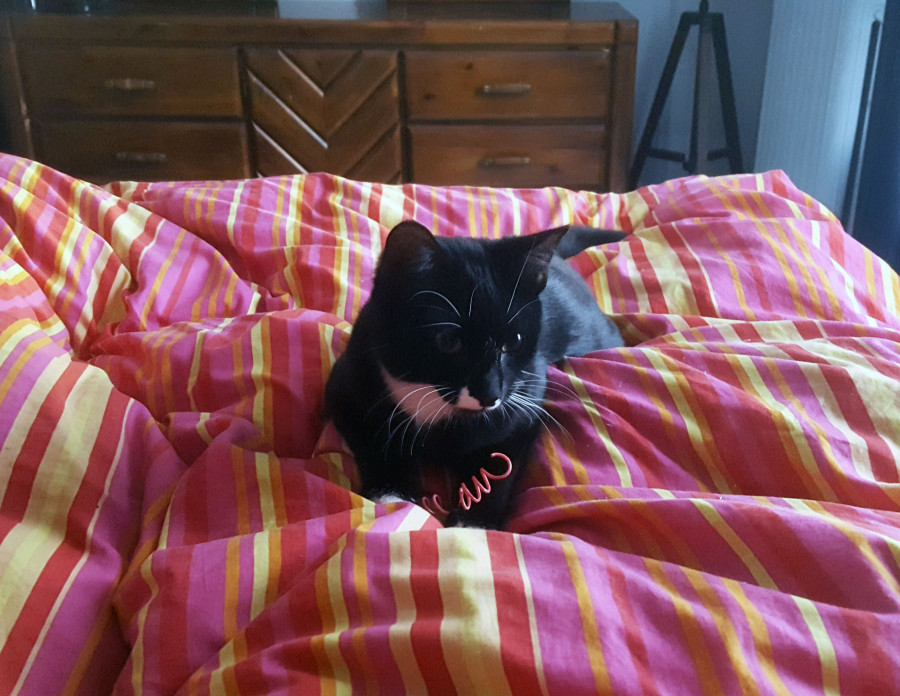 Molly is not amused: Or maybe she is. She has resting WE ARE NOT AMUSED FACE, so it's hard to tell.

Here are some cuddly boys: I weighed the kjittens yesterday. With the boys, this just meant putting new batteries in the scale (they had worn out the old ones playing with the pretty lights), weighing myself, and then weighing myself plus each kitten. Molly, being semiferal, was a little more challenging.

I put the scale next to the food bowls and rattled the cat food bag. Once everybody was safely in the bathroom where the cats get fed, I closed the...

Molly, seeing the door close, MADE A BREAK FOR IT and ESCAPED. (I am a vile and perfidous Ape!) She slid through like MacGyver diving under a closing blast door, and I was left with two already-weighed boy kittens and their chorous of demand for crunchies. (Because our cats are mostly fed wet food, crunchies are a hardcore treat and in high demand around here.)

So I opened the door again and put food IN THE BOWLS this time.

Molly came trotting back and settled down by her bowl. (She has chosen the one closest to the door, natch, for fastest escapes.) I SHUT THE DOOR.

She was busy enough with the crunchies that she only glanced over.

She will allow herself to be petted while eating at this point, after long practice, as long as you make yourself small and don't loom over her (VILE TIPPY APE). So I crouched down on the scale, reached over, petted her, and very carefully lifted her six inches off the floor. Before she started to squirm, I managed to read the scale!

Molly is 8 months, one week old (roughly) and 6.9 lbs. The boys are 6 months, 3 weeks old, and both are exactly 8 pounds. This keeps surprising me, because Gurney looks bigger--but he's long and rangy and very skinny, whereas Duncan is more compact.

And now, I need to go work on my novella.

Well, today was supposed to be a hugely productive day, which was largely derailed by an absolutely killer and pointless anxiety attack that I finally managed to get the better of about an hour ago. So now I feel less like I'm harboring a chestburster, but much more like I want to collapse in an exhausted heap--but I have not written nearly as much as I wanted to, so I'm going to go back and try to get some more. Because I really, really want a draft of this story by the end of the year, because god damn it, 2016, I will beat you.

I've been writing first thing in the morning, mostly, which is nice and involves co-authors, but does involve eventually having to get out of bed and let the dog attend to his biological needs. Here are my coauthors helping this morning, however: I moved to the living room after that so I could watch it snow more conveniently. The snow, alas, was a bit of a disappointment on the nor'easter front--our predicted 8-12 inches turned into about a wet inch and a half overnight. Well, at least we probably won't have to shovel much.

And we did get a fuzzy-tailed visitor. (Scott saw rabbits last night.) Karen Memory is the January 2017 selection for the Goodreads SciFi and Fantasy Book Club, so if you've been waiting to read it with friends, here's your big chance!

Here's a bonus photto of me and Ace, and a bonus kitten. Because I know what you guys are really here for. 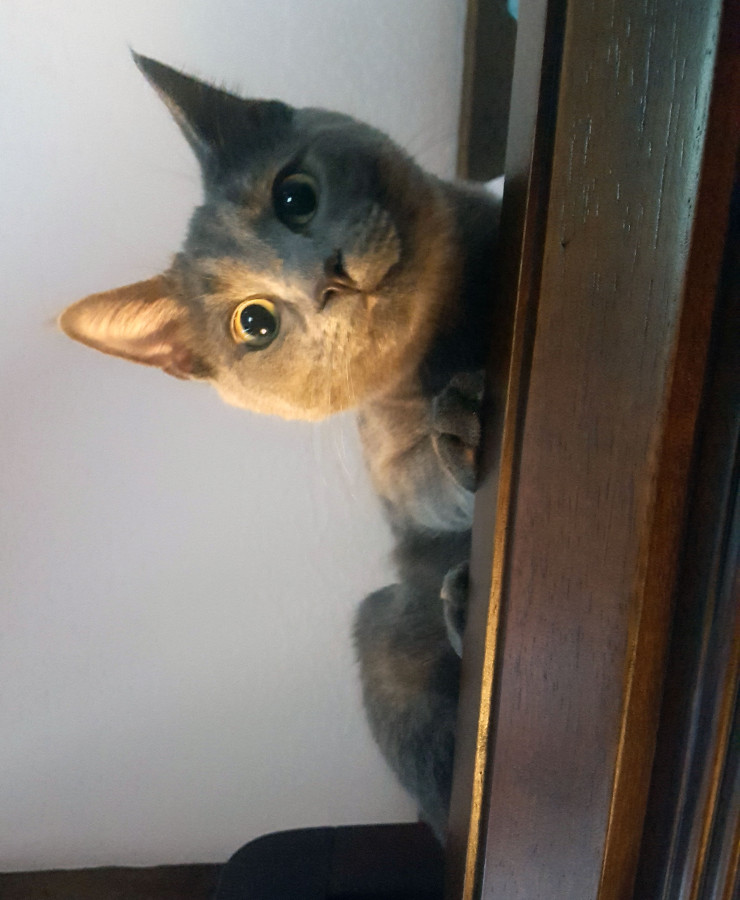 And now I have to get up and put a goose in the oven and walk a dog, when I really want to stay in bed and write for a while longer.

The caper in this caper story I'm writing kind of vanished.

I had too many genre savvy characters who went, oh it's a caper, and got on with their lives.  So now it's more of a character-driven adventure, without all the who's-zooming-who.

I got stuck three times writing the first thirty pages of it, went back and started over, and you know, it just didn't want to go into the shape I had planned. Eventually, I decided I would rather have a finished story than the story I had planned on it being, and got with the program. Now I'm averaging six pages a day and expect a draft before the New Year.

Stories are kind of like relationships. You can try to force them to be a thing, and break them, and make everybody wind up unhappy.

Or you can let them be what they are, and enjoy them, and realize that sometimes you have to let go of your control issues and let things just be.

Time for more kitten pictures. It's a wonder I ever get anything done, what with kittens being so adorable. 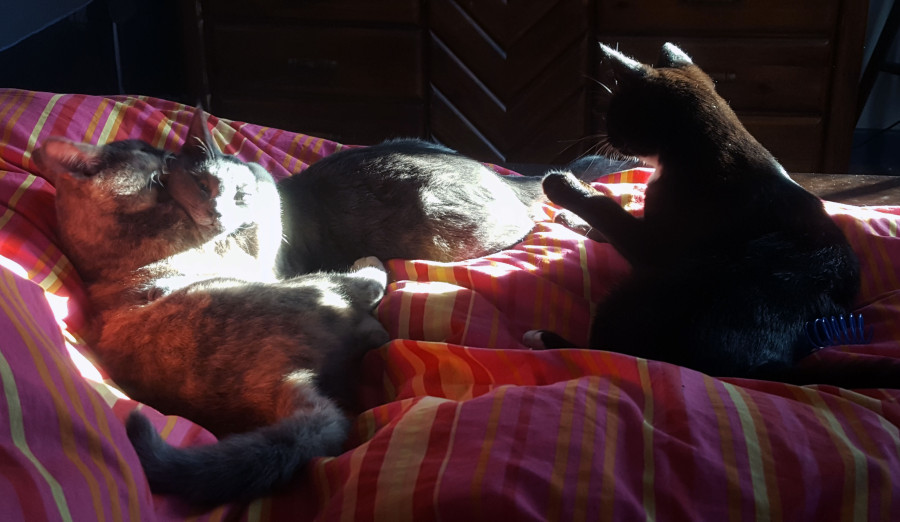 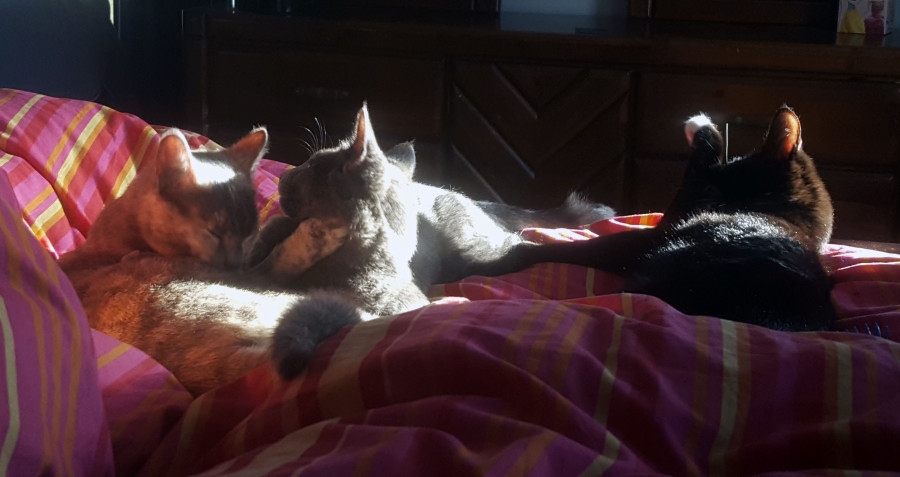 This morning's wrestlewashing session pleased everyone.

Current state of the work is: efforts to combat distractions. Because life is full of things that need doing, and it's easy to get distracted from the actual job of putting stories into pixels, I've been writing in the morning before I get out of bed. This involves a certain amount of typing around the kitten swarm, but has the double benefit of Actually Getting The Words Done, and also making me feel good about myself for the rest of the day.

So there's that. I did the first round of revisions on the short story yesterday, and I'm increasingly happy with it. It's called "What Someone Else Does Not Want Printed," which is, as you might know, the second half of an Orwell quote.

More on its disposition when I can.

Also, I just posted two links to podcast interviews (both of them with Scott Lynch as well as me) over on my Patreon.

Next project is seeing if I can get a few more words on Rook and Ruin, which is the possibly final title of the Karen Memory novella I'm working on. I think it's finally coming together--I have to figure out a bit of social engineering to make the caper work.

But with a little luck I'll get myself back into the discipline of working and creating every day.

When it feels like the world is burning, sing. Now, you may ask yourself, what exactly is this bottle of Devil's Tongue habanero-infused olive oil doing tucked beside the radiator?

Well, friends, it's cold enough in this ancient house that the olive oil had solidified, making it difficult to decant for holiday gifts.

Radiators, however, are warm.
Collapse